Campaign for the Kingdom, Chapter 13: A cold, dark, little affair

"Oswald, Duke of Dunharrow, claimant to the throne of the Kingdom, had lost most of his men along the road. Disease and homesickness had claimed most of them. Only Duke Ulrik stood with him this cold day, facing Baron Oswald the Younger and Duke Roderick. 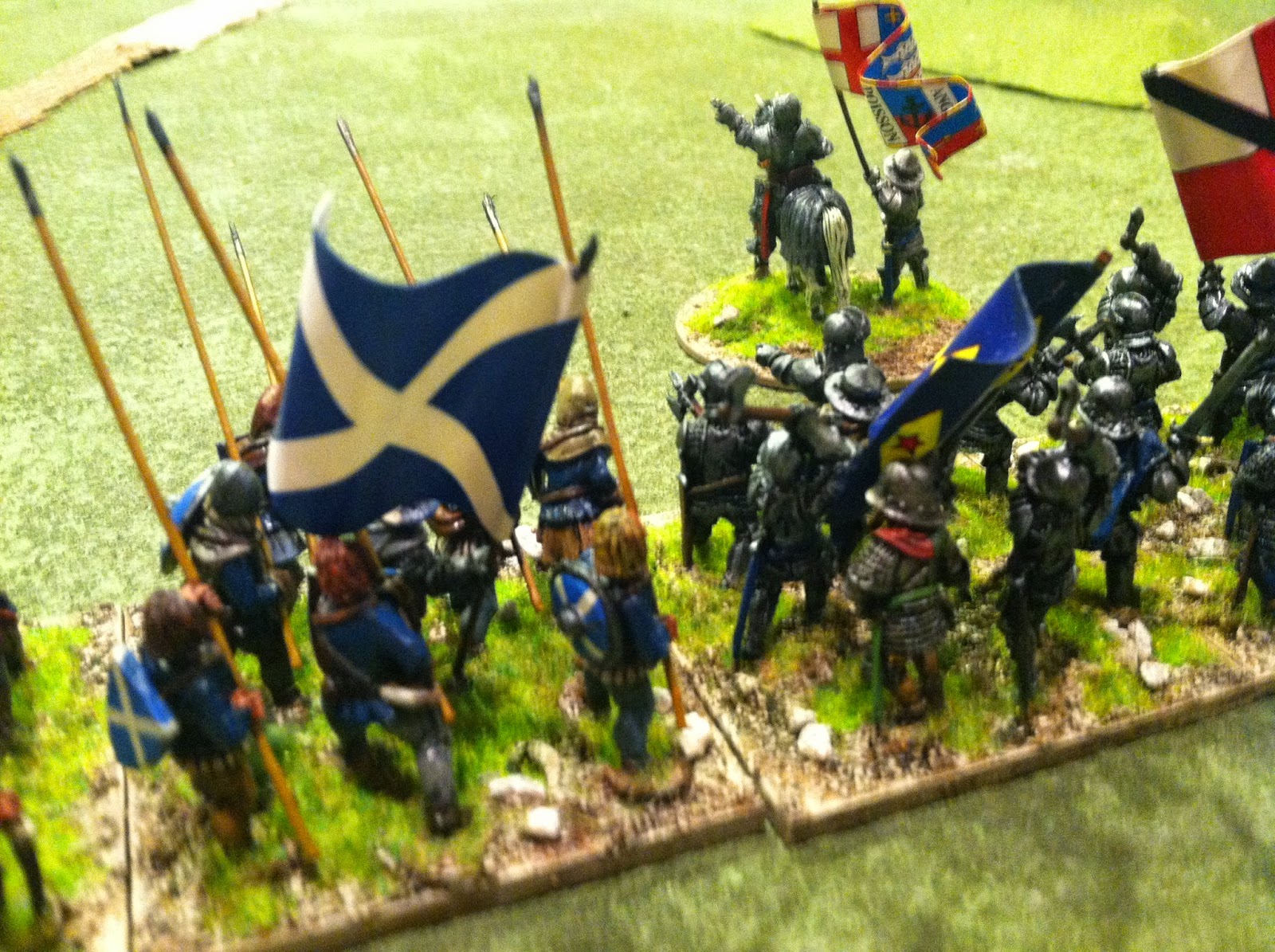 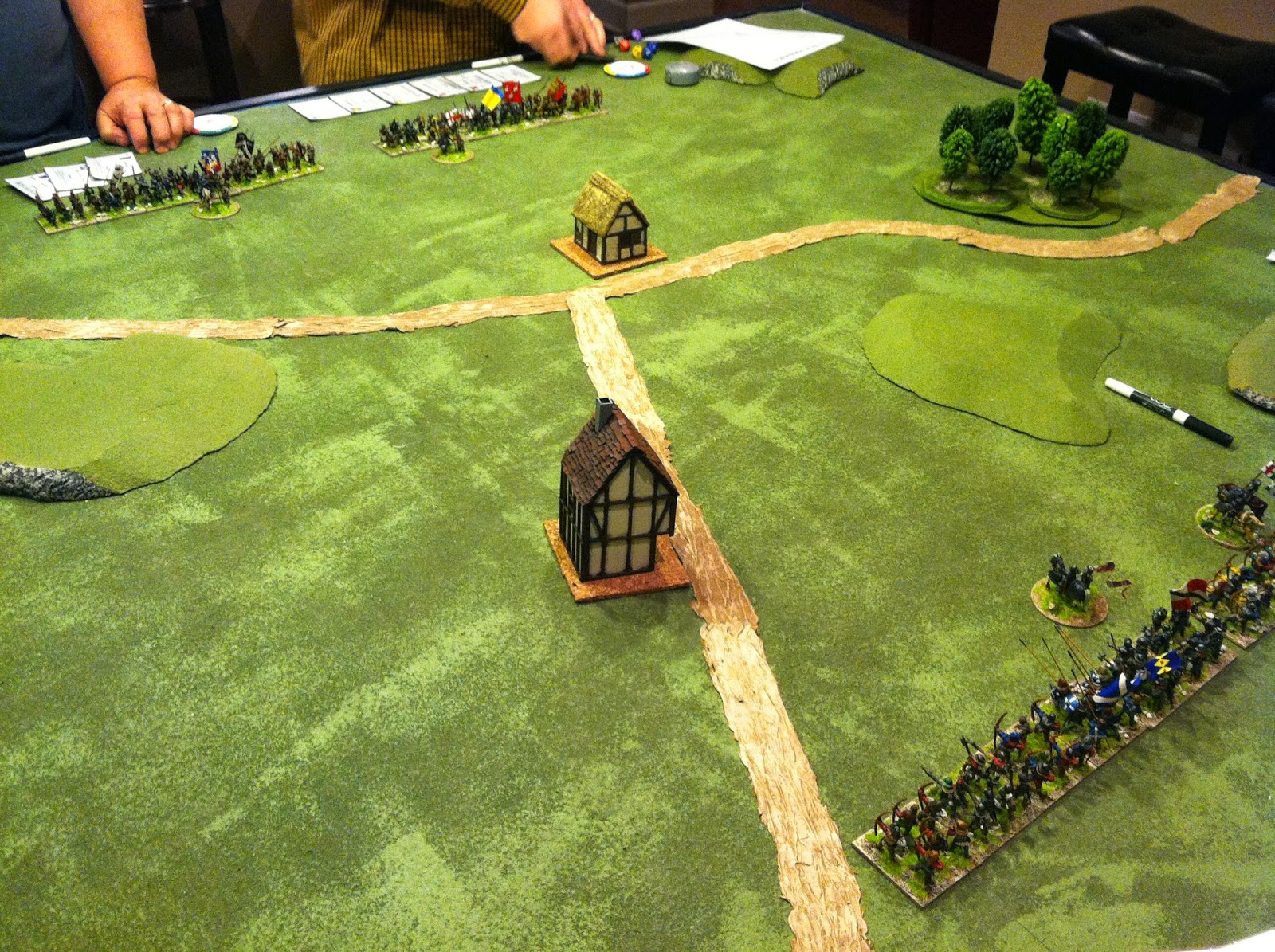 Two villages stood between them. The only chance for fodder and lodgings over the coming winter.
Horns blared and Oswald's men trudged slowly forward. Across the battlefield his enemies moved in fits and stops, seemingly not sure what to do. 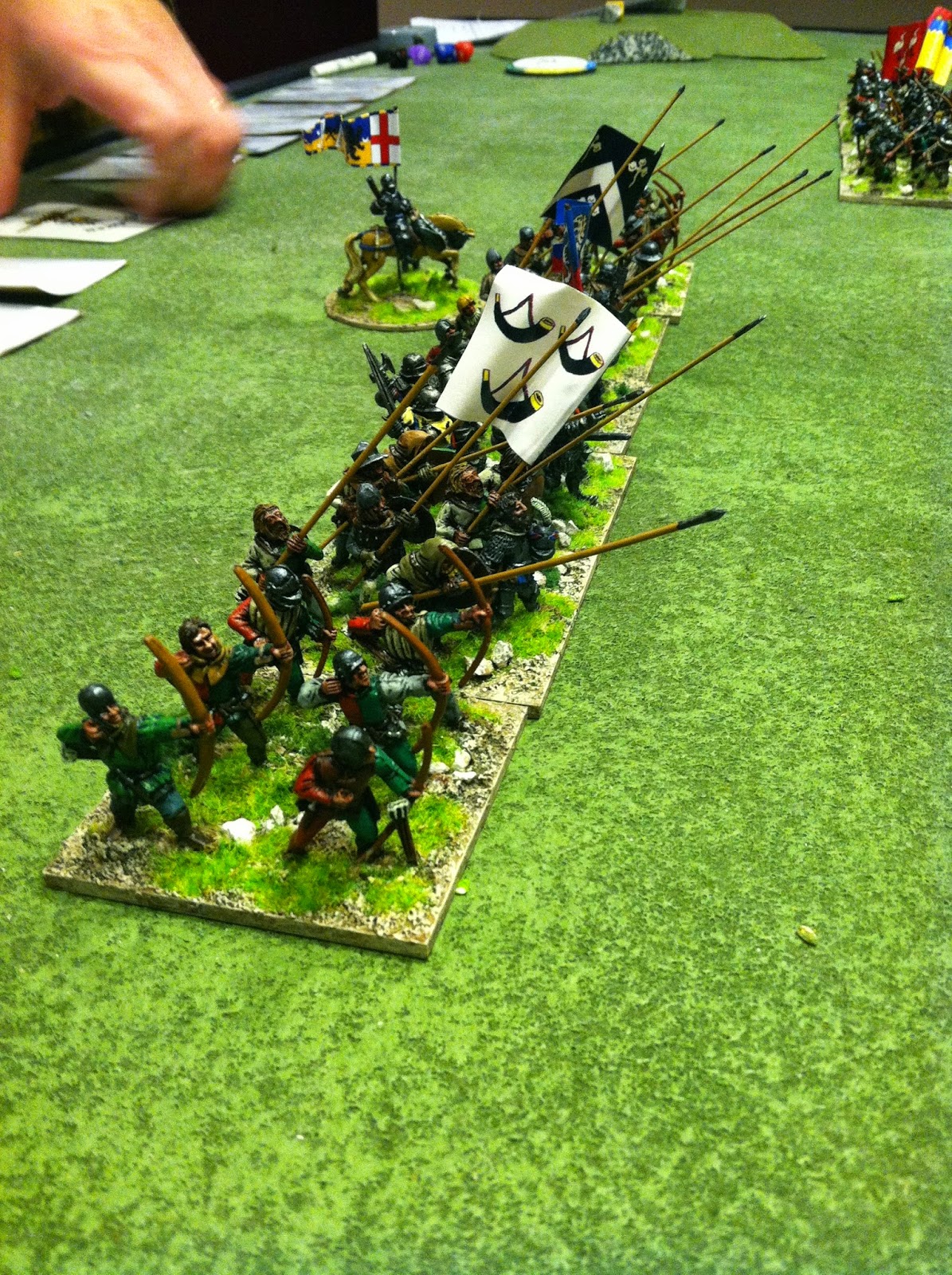 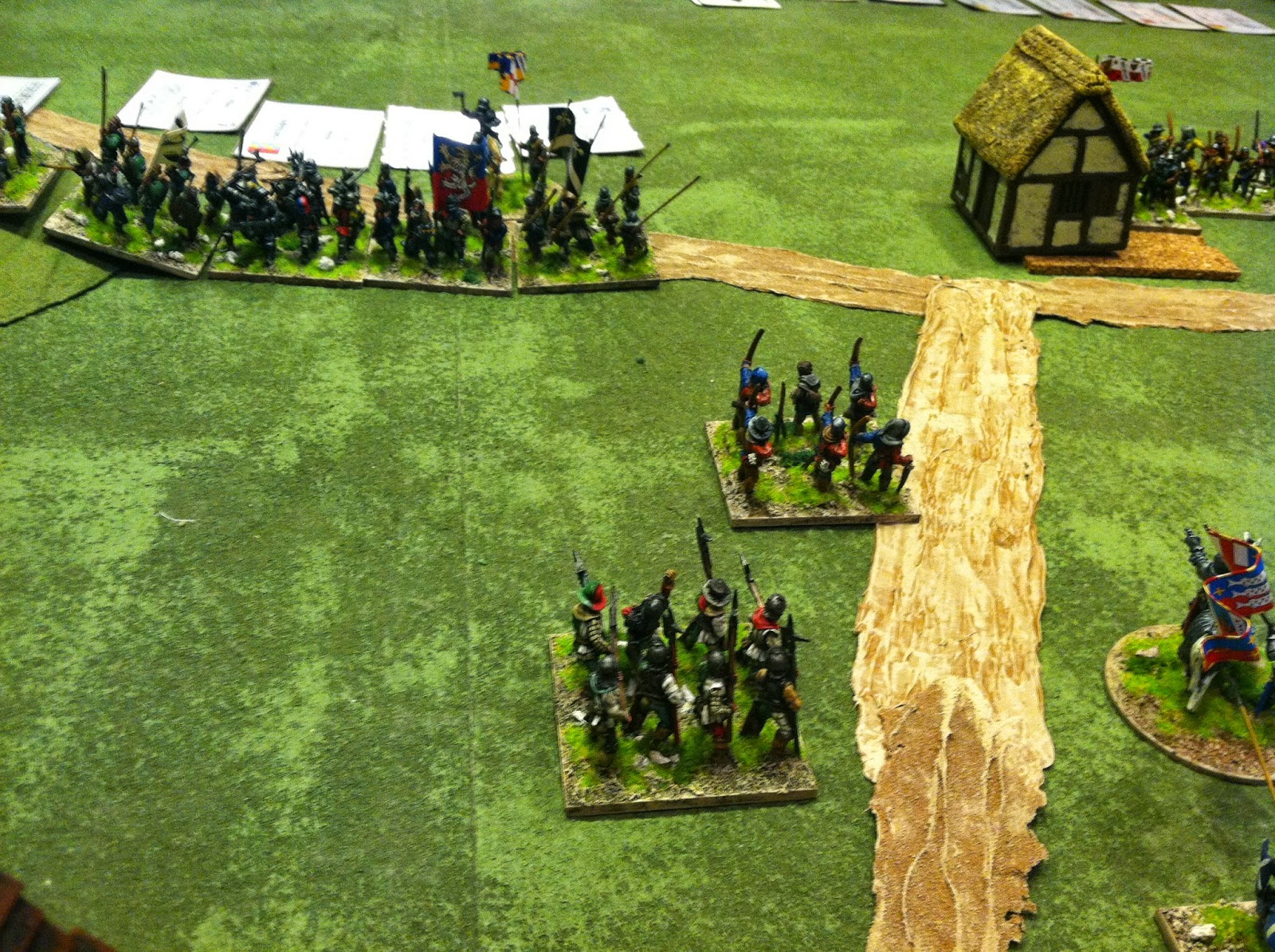 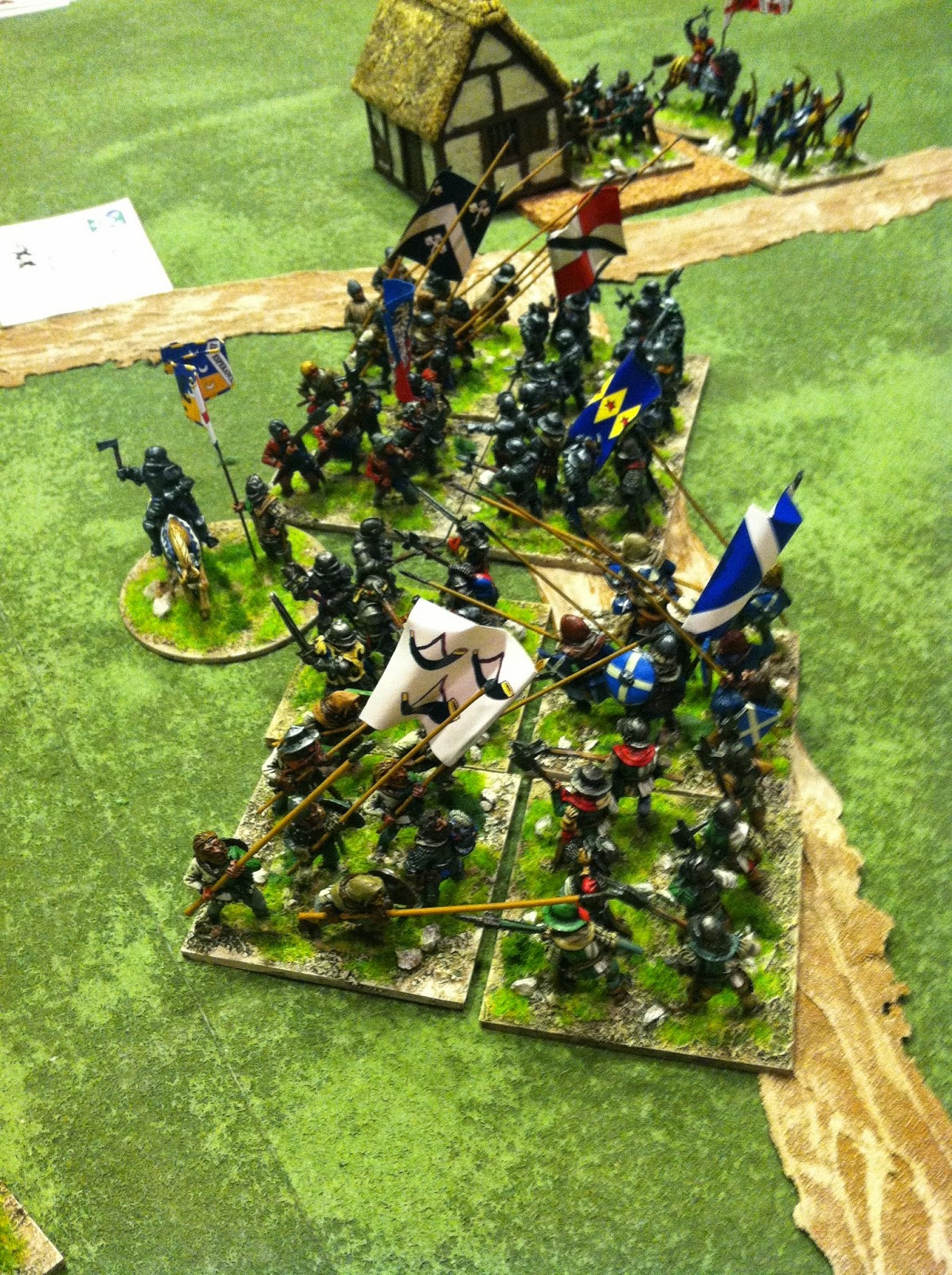 Oswald's men surged forward, the lighter troops out stripping the foot knights and pikes. A lone unit of archers far forward of the rest. They loosed. Ulrik watched in disgust as a unit of mercenary pikemen fled.
A village was taken by each side. Oswald's village was held by archers. They were peppering Horace's flank led by Ulrik. On the other end of the line, his men were trading blows with Roderick's.
Each side was losing men. Too many.
Ulrik was able to dislodge Oswald's men in the village and take it. Horace now had both. That was too much for the pretender's troops. They fled into the snow fall that had started during the battle.
Horace held the field. One step closer to the throne. But would he have men to hold it?"
A great little fight with only 4 players. Also, a close one.
Posted by BaronVonJ at 9:57 AM

Splendid, these minis are splendid!

If so, what ranges do you use for the various Command Radii? Also for shooting and movement.

Next I believe that you once mentioned that you have a "Steady" Leader rating. How does it rate compared to the four in the rules?

Finally, just how do you determine what the ratings are for the different Leaders? What do you roll and how are ratings distributed?

Jeff, if you read through the previous campaign posts all your questions will be answered. But briefly. The original rules use 6 stands where you remove a stand each casualty. I use one big 60mm square base that equals roughly what you would have with all 6. Then I have a dry erase roster sheet for each unit (you see them in some pictures). Ranges are all the same. Steady is a typo there are only the four. roll d10. 1-2 Buffoon, 3-4 Plodding, 5-8 Efficient, 9-10 Brilliant.

Thanks for the answer, Jaye. I had read through the other posts but the "Steady" fooled me into thinking you'd made more adjustments.

I have just downloaded iStripper, and now I can watch the sexiest virtual strippers on my desktop.