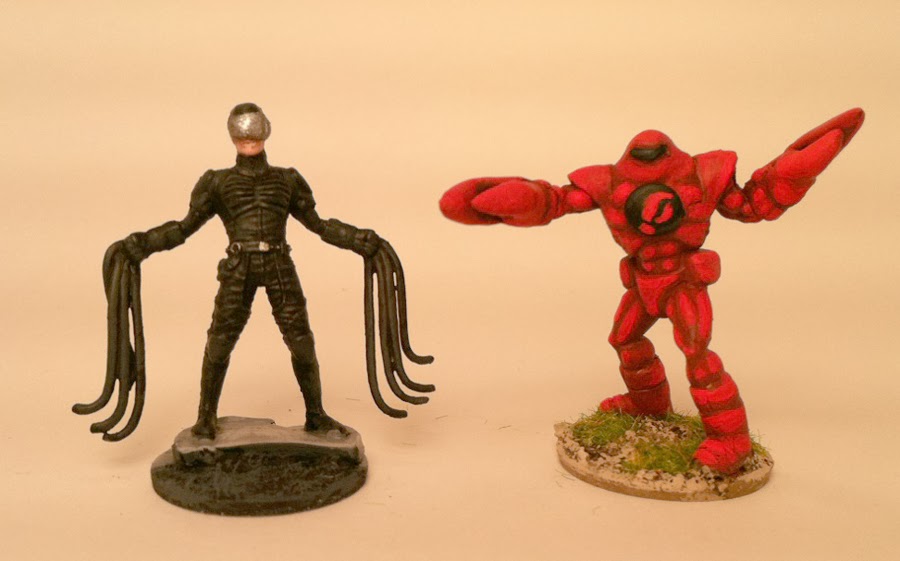 Whipper is some Clix named Lash repainted and added visor. Snapper was the terrible SHIELD Mandroid armor I always hated from the comics with added claws. He's a villain who stole the Army's top-secret C.R.A.B. (Combat Ready Armored Battlesuit) prototype.
I can't take credit for their names. A PIXAR artist recently took up a self made challenge of drawing a superhero/villain a day. He 360 drawings and I'm "borrowing" as many ideas as I can.
Posted by BaronVonJ at 10:12 AM

A+ work...inspiring stuff to dig into my clix again to see what else I can hodgepodge together. I made a few cool changes with easy head swaps from leftover Crossover miniatures heads.

Love the super team from the south, heh, but I live down here. I designed one I am going to convert for SuperSystem called the Confederates...don't have my book but my "sonic" was Rebel Yell, a guy I see wearing a confederate hat. Of course that was along with the Dixie Pixie (repainted Wasp),

I've got Hellbilly, Gator and some others to do next.
http://365supers.blogspot.com/

I had a Gator in mine also come to think of it...I was eyeing the Pulp City Gator figure they make.