Campaign for the Kingdom: Battle of Broken Hills 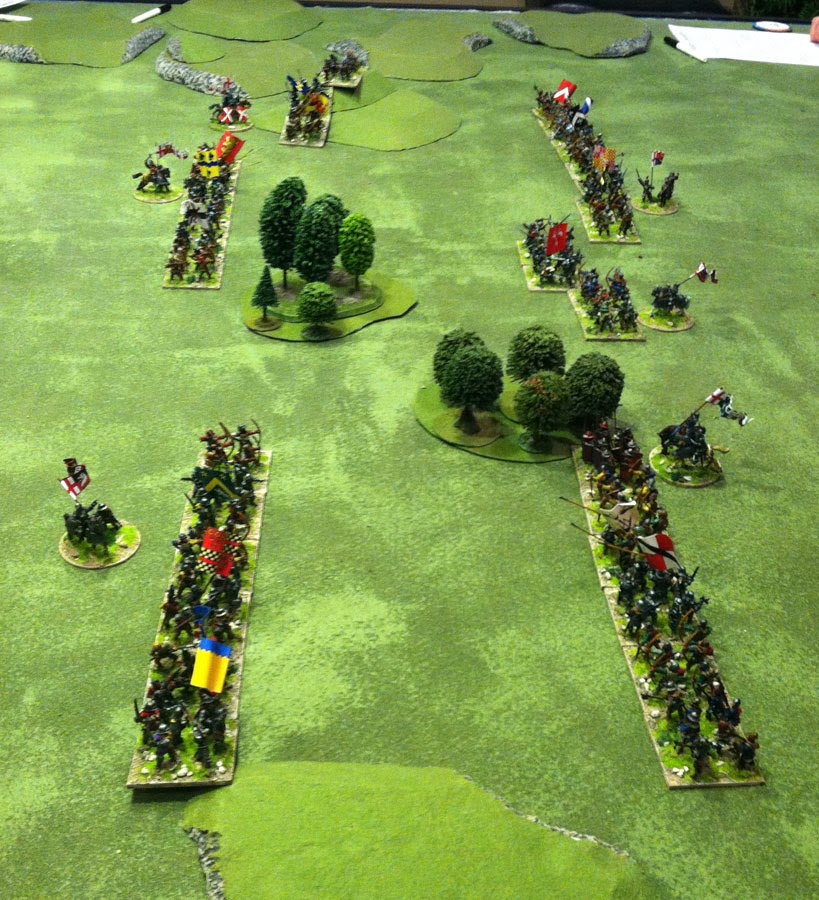 The first warm day in what had been a bitter winter, dawned over the Kingdom. Horace, Duke of Dunharrow, and claimant to the throne, had roused his men early and had them on the march. With him rode the men of Stonekeep, led by the young Baron Lionel. With him was also Rutiger the Younger, son of the deposed King. Strange allies in what had been an even stranger campaign.
They had marched most of the morning and had but to make the pass through the Broken Hills, those troll haunted hills said to be the burial place of giants.
But that is where Horace ran into Oswald, Baron of Ock.
Oswald's spies had informed him of Horace's route. He gathered his bannermen Roderick, Duke of Greendale and Archibald of Westgate. Togther they would smash this usurper and put the rightful king of the throne. Meaning, himself.
This was the usual slugfest, but with a twist. As fate would have it, most of the commanders rolled abysmal Commander Ratings. Only Mike, controlling Rutiger, got a Brilliant ratings. Leaders would have to stay tight to stay in command. This would lead to some close in fighting. Any breaks in the line would be quickly exploited. 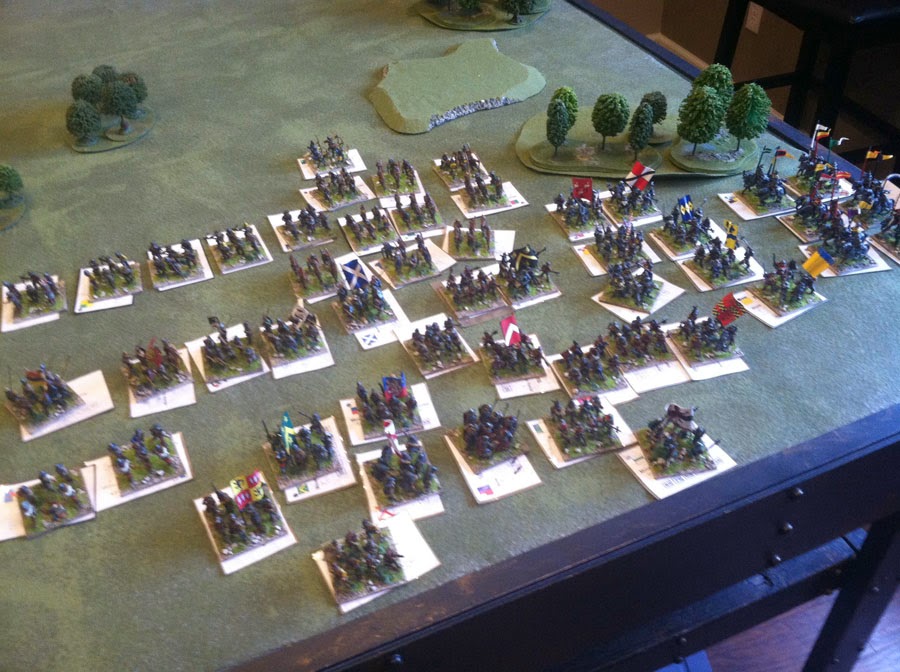 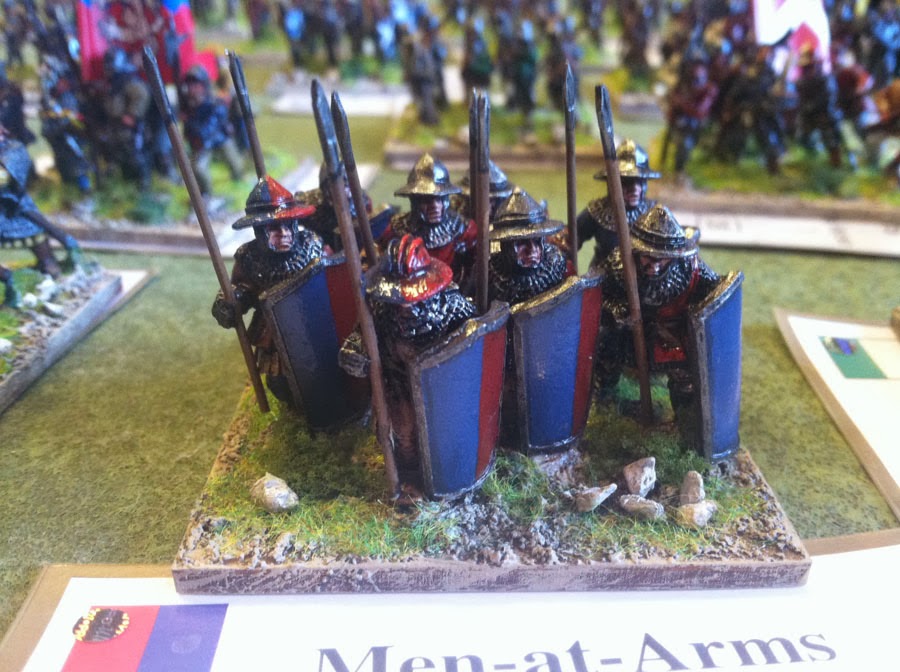 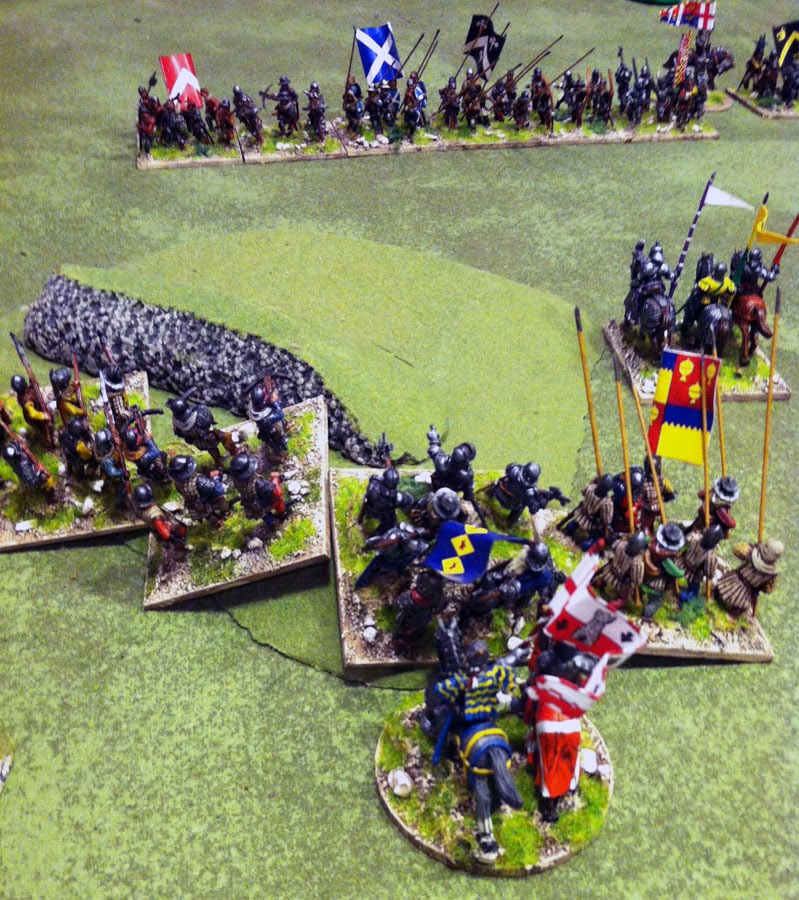 Lionel urges his men up the hills 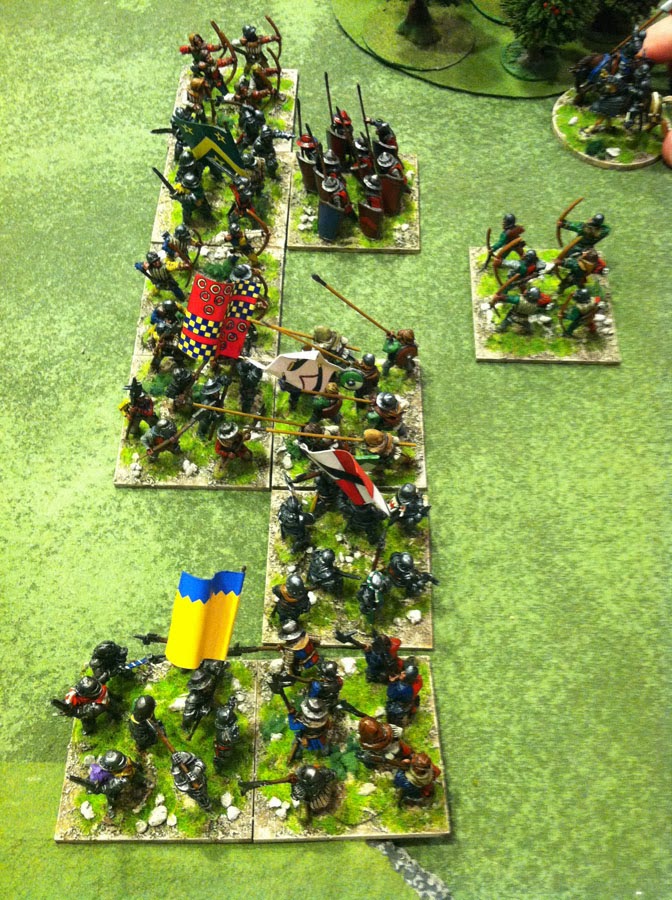 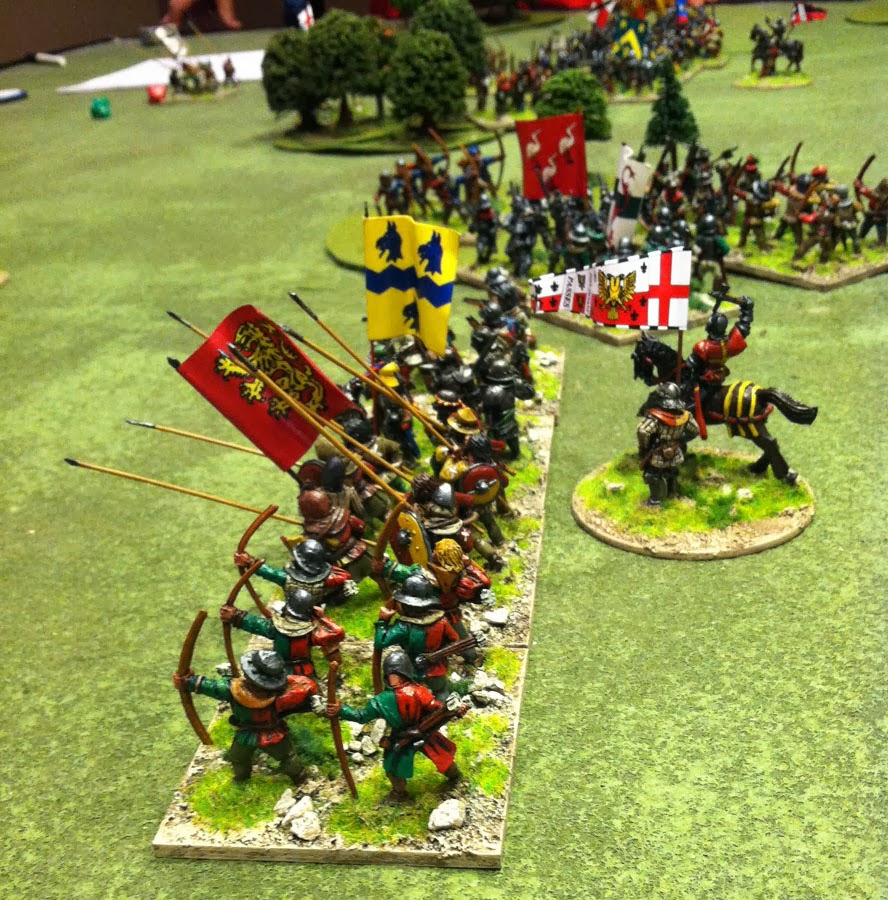 THere was the usual start and stop as troops closed. I controlled Lionel on the far left of Horace's line. My plan was to get into the hills and hold the crest against all comers. This would prove difficult. By the time I got there, my men were winded (one of the few rules sets I know that takes into account fatigue). I had the only horses on the table, and failed command roll sent them hurtling forward. They died under a hail of arrows. The rest of my troops didn't fair much better.
But, on the rest of field, Horace's men were killing or driving off most of the center. With all but one unit of archers left in my command, it looked as if Horace would get outflanked. Archibald's men turned to attack Horace. This left them horribly exposed to my archers on the hill. Turn by turn they chopped Archibald's command down, until finally the ninth unit in Oswald's army broke, bringing victory.
Oswald was captured and, in front of his men, executed. The wind picked up and cold weather moved in. It appeared winter had not ended. Men were sent to winter quarters.
Lionel had felt slighted after the battle. Horace had taken the credit for victory. But was it not his men who had held the line? Was it not his men who turned the tide?
Horace, it seemed, would have a new opponent come spring....
Posted by BaronVonJ at 7:50 AM

Nice batrep and an interesting post. Bad luck for Oswald!

Following the campaign with baited breath.

Not to worry his son will pick up the banner. Always does.

That WAS his son. Looks like we need a cousin to step up.

Then his second cousin twice removed. With the way they pump out heirs in the Kingdom, there's always plenty in waiting.

Love this rule set! Hate my dice... Roderick the Buffoon