Kickstarter was a success, now we're opening it up to the rest of the world! 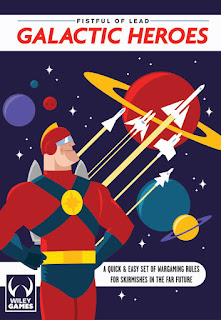 Fistful of Lead: Galactic Heroes is designed as a quick set of tabletop wargame rules for skirmishes in the worlds of Science Fiction. The rules are easy to learn and still keep the flavor of the genre.

What separates Galactic Heroes from most tabletop miniature games on the market, is the unique card driven turn mechanism. This leads to snap decisions and tense moments where all the players are involved.

For Galactic Heroes, we wanted the play to be fast and furious, with a Hollywood flair to it. For that reason, record keeping is kept to a bare minimum.

In most games, each player can control up to 5-6 miniatures without much trouble. Games can have up to 8 players without slowing down the game. Now, you can dig out all your old Sci-Fi miniatures gathering dust and have a game set in a galaxy far, far away or a grim, dark future. Or BOTH!

Experienced wargamers and new players alike will enjoy this game. It's perfect for convention games and just one on one skirmishes.

To play Galactic Heroes you’ll need: this rule book (or, after a few games just the Quick Reference sheet), several 10-sided-dice, an ordinary deck of playing cards, a place to play, a measuring tape, and the miniatures representing your favorite troops. Markers to represent whether your models are Shaken, Wounded or need to Reload can be found in this rule book.

Eight-sided and 12-sided dice may also be needed for some of the advanced optional rules.

Fistful of Lead: Galactic Heroes was written with 28mm figures in mind, but you can easily use models ranging from 15mm to 54mm without any changes.

So check the seals on your vac-suit. Have your blaster at the ready. It’s time to see if you’re a Galactic Hero!
visit us at Wiley Games
Posted by BaronVonJ at 9:39 AM

Excellent....off to order a copy!

I just bought the pdf version of the rules and supplements, there is much more content than what I expected. Congratulations Jaye it's a great game!