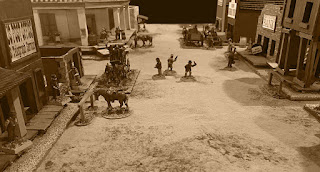 We had the great pleasure of attending the Maneuvers Wargaming convention in Tulsa Oklahoma last weekend. It was their first year, and only our second con as a vendor, but it's off to a good start. There was a wide variety of periods and genres, including a Fistful of Lead game featuring zombies, buffalo men and centaur natives. The hotel and the hosts were very accommodating and every game I ran had a great attitude. 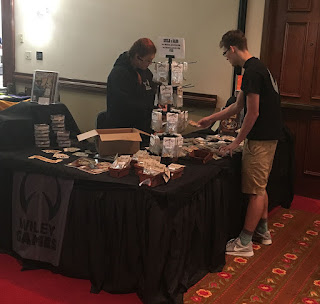 Wiley Games sets up
Now to the games: 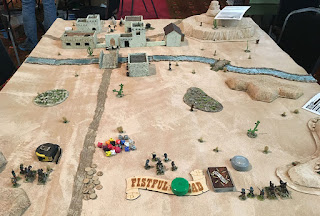 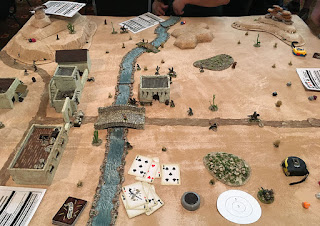 Friday night, after a four hour drive, we put on Casas Grande from the new Mexican Revolution supplement to Fistful of Lead. The Maderista rebels had to take the town before the poorly defended Federales could be reinforced. Despite the Federales getting a machine gun and artillery support, the rebels took the town, flipping history around.
The Boy was in charge of the reinforcements. He was brutally savaged the second he appeared.
This would become a theme...
Saturday morning we ran a Fistful of Lead: Horse and Musket game, "Hessians without no Aggression". Rebels had to grab a  poorly guarded wagonload of powder before the Hessian mercenaries could be reinforced. It was an interesting game, as the we had a real Hessian playing the Hessian jaegers, who were armed with slower, but longer range rifles. 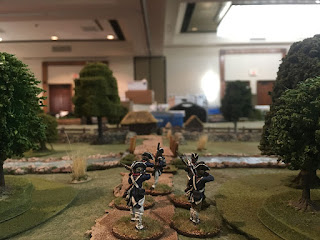 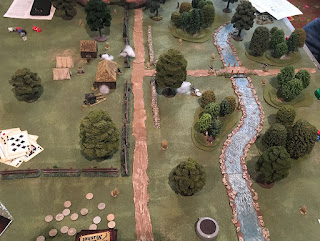 The players quickly learned (the hard way) not to pop off all your guns in one turn. You spend the next whole turn reloading while your opponent moves around with impunity.
The rebels, tried, but just couldn't get to the powder in time. Once again, the Boy showing up on turn 4 with the British Light infantry, was cut to pieces by Colonial troops. 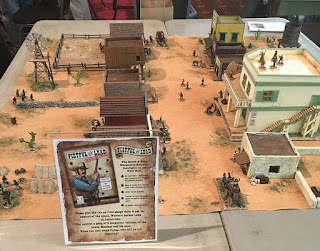 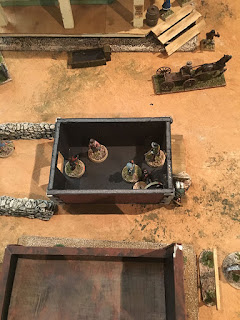 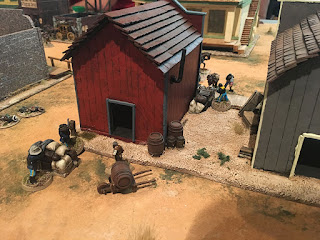 Saturday afternoon was the latest Fistful of Lead scenario from the 99¢ Mostly Monthly Scenario "Gold and Gunfire". We had a great group of guys, and the scenario needed up as a stand off when Baby Face Fenster, one of the objectives, ran off after a failed Recovery check.
I was going to pack up before the evening game, due to lack of people signing up. But i guess I wasn't the only GM with that problem. I need up putting a game of populated by all the nameless GMs. Once again, a great game, and once again Fenster bought it. 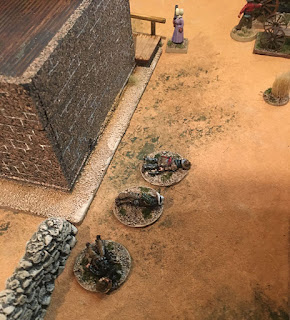 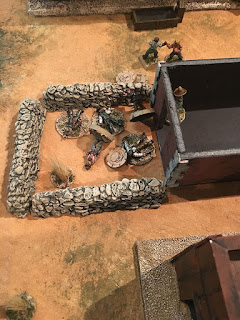 Blood Alley outside the jail
A great time, and we walked away with "Best Terrain" Award! Special thanks to my wife and kids who lugged boxes, sat at the vendor table for hours, and put up with all us Gaming Geeks. 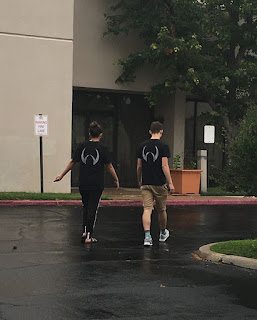 We'll be back next year.

Posted by BaronVonJ at 1:11 PM

Great Falls has a convention next month! You should come! Miss you all

That's more of a drive than I think we can make.
Miss you, too.

Congrats on the Terrain Award!