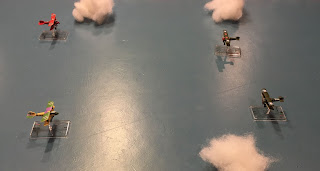 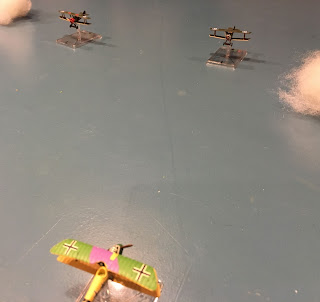 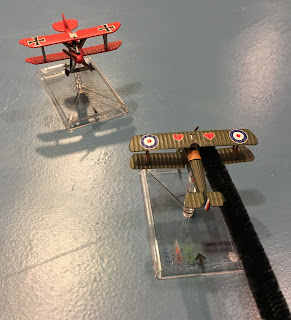 It's a great system to play a whole campaign in one night of afternoon. I have already started remounting planes on magnets and ball bearings to simulate those climbs and banks. Iwill be trolling eBay and the like for more planes.
Posted by BaronVonJ at 8:08 AM

I enjoy this game. I got one of the big bombers. It makes for some interesting scenarios.

It gave the illusion of cover. I need to get some WW1 mats (which they sell) but refuse to use the plastic old GW mats everyone seems to use for Blue Max..

I'm a huge fan of this game, even though I often get turned around. It has the right amount of chaos to make the battle feel "real" That and I love love love the WWI planes!

Baron- I made my WWI matt based on the maps that came in the old Red Baron computer game that I played on a Tandy 386. https://skullandcrown.blogspot.com/search/label/wings%20of%20war