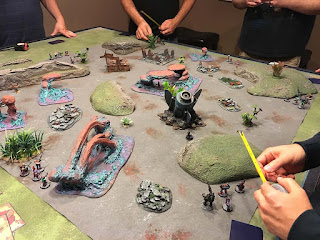 The Basement Generals gathered last night to help me get another playtest in of Wasteland Warriors before RECRUITs next weekend. The scenario involved rescuing an important diplomat from the toxic wastes. 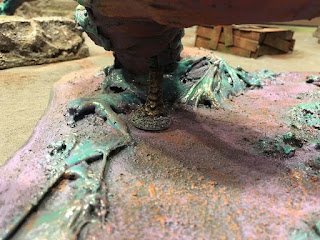 We decided he was Mr. Hanky, an emissary from the Turdians and the first group to rescue him would get 20 points of Renown. Scattred around the table were "Scavenge Points", areas where goods and tech were laying undiscovered, but also chances for danger. For instance, one group found a booby trap and had a mutant blown up. 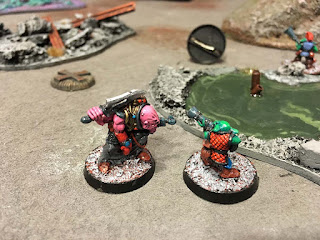 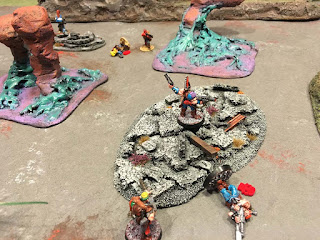 With 7 players and a 5x5' playing area, the bullets, beams and blasts started flying right off. Once again, Orange Crush and his ladies were chewed up pretty early at the hands of some green skinned mutants. 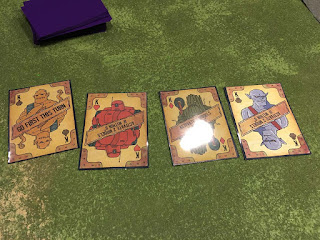 In addition to the regular awefulness of the Scavenge Points, I threw in the Joker cards. When these are used they act like Aces, but can also activate Events. With a lot of players, this happens alot. Over the course of the game we had a Sentry bot activated that blasted any movement within 24", an earthquake that left several models pinned, a big tenclely beast that was awoken by the noise, an 8 legged riderless mount and a Moon Beast that loved to eat an loot lying around (my answer to the Rust Monster of D&D fame).
Whenever a model was taken Out of Action he leaves behind a Loot marker, which acts another point of contention, and acts as Renown points.
Over all, things went great. Scavenger Hero Award goes to Big Bob the robot. His targeting computer went out early (i.e. he ran out of ammo permanently) and went Hand to Hand the rest of the night. By the end of night he had the brains of 4 enemy gangers on his rusted fists.
Posted by BaronVonJ at 12:52 PM

Senator hanky better be one of the stretch goals!
Cheers
Ths