A weekend of Wargaming

I had a pretty incredible weekend. Good friend and fellow wargamer Thomas Foss of Skull and Crown fame came into our sleepy little hamlet to be the Guest of Honor at RECRUITs, our local convention.
We spent Friday eating Kansas City BBQ and visiting the truly world class National WWI museum. 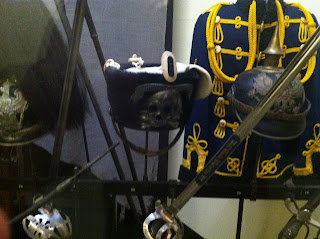 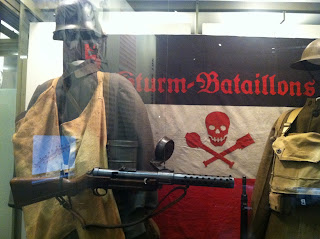 Afterwards, we set up for the next day of gaming.
Thomas ran his Wooden Wars "bringing the war back to the floor" game Saturday morning. We had kids and adults alike flinging small rubber balls across the floor smashing troops left and right.
While no one was looking, a samll, unassuming girl rode her cavalry around the flanks and captured the flag, winning the game for her side. HUZZAH! She was rewarded with a medal, and better yet, some lasting memories of her glory. 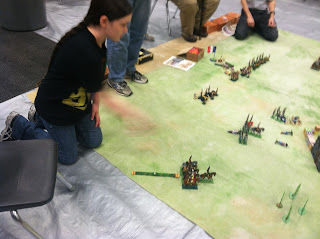 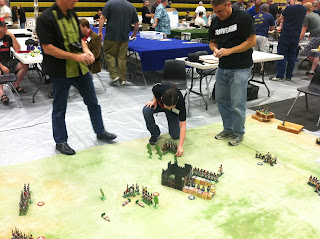 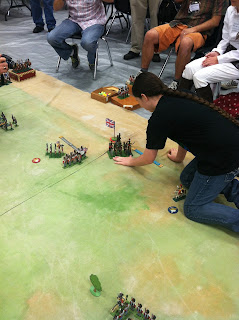 Next, I ran an Imagi-nations game using some of Thomas's soon to be released Wooden 54mm Lace Wars troops, and rules based off of Simon Miller's fantastic To the Strongest rules. I asked Simon help with some simple con rules, gunpowder tweaks to this game and he obliged. Truly a cooperative effort all around. 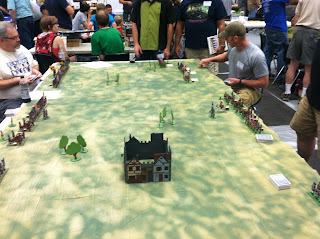 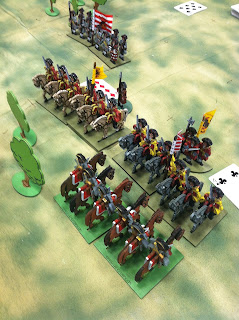 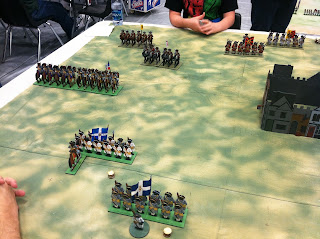 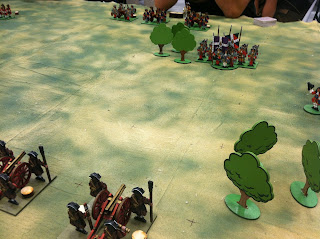 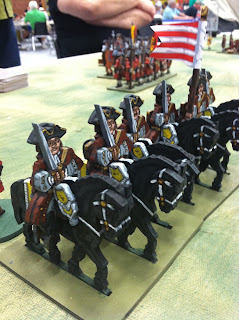 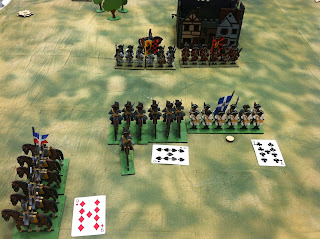 Besides lots of interestt in the miniatures, the game went so well, we had enough people who wanted to play it again.

Sunday, Thomas put on his Wooden Wars game on to a slightly smaller crowd (Sundays are dead), and we finished the night with some boardgames with my kids and watching Mad Max.

Today, I stuffed him full of more BBQ and sent him on his way. What a great weekend....

Posted by BaronVonJ at 3:37 PM

Cheers to you and Thomas for an event well planned and presented. Give him my regards. I will be writing up my battle report from playing in his floor war game.

Splendid to see the first draft of my new rules being released on an unsuspecting public! I hope they went well.

It was an awesome weekend! Met some great folks, ate BBQ played fun games, and ate more BBQ! Thanks for being such a great host, oh Baron- and Thanks Simon for working with us on some rules!