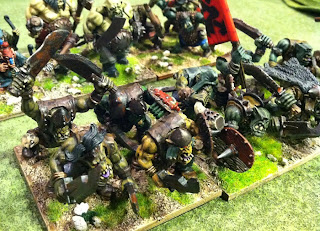 Three straight weeks of Fantasy! This time, it's big battles using a set of rules I've been wanting to try for awhile: Mayhem! by Brent Spivey. Mr. Spivey gifted me his earlier work Havoc. It was a great read that I found almost Zen-like in it's approach to wargaming. Alas, I never used them in battle, but I was determined to try Mayhem. My War of the Roses troops which are veterans of 20 years of battle would stand in as fantasy humans, and my small force of Orcs would be the only true fantasy elements. Mayhem works at any scale as each base is a unit. Not a new idea, but one I personally really like. The smaller the scale, the better o make each stand a vignette.
Mayhem uses different die type to represent a stands Movement, Combat Quality, and Ballistic Armor Rating. The lower the better. So a d6 is better than a d10. Sounds opposite of what you normally think, but it works well. 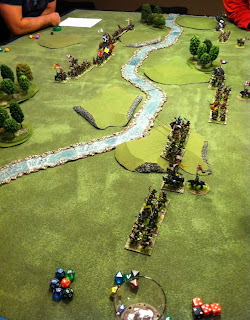 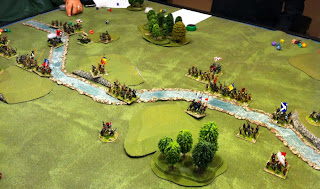 The core of the system is the Versus System. Risk vs Reward. For just about every roll you have the option of taking the default, which half the value of the die (so a d6 would be a "3", a d8 a "4") or try danger and roll the die for whatever comes up.
If your Movement value is d8, for example, you decide, do I use the default and these guys just move 4 inches, or do I risk it and roll hoping to get 5,6,7, or even 8. There's a lovely gambling element to it.
In our game, some heavy cavalry with lances charged some orcs that had just crossed the river. Because of modifiers, the knights were rolling a d4 vs the Orcs d8. The knights decided to take the default of "2" as their roll. In Mayhem, roll have to roll below your opponent in order to do them Harm. A roll of "1' always kills. This first hit, for most troops, Disorders them. A hit on an already disordered unit eliminates them. So our knights had a 25% chance to outright kill the Orcs, or take the default and almost certainly put a hit on them and drive them back into the river.
The Orcs rolled a "1". Oh, the best laid plans, etc..... 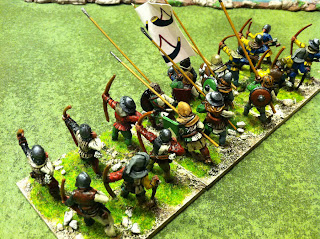 The other mechanic of note is Overdrive. Your leaders randomly (or take the default!) generate a pool of Action Points.Most Actions only cost a point. Move a unit, shoot arrows, etc. But, you can choose to make a unit go again, and again, but each subsequent action costs more. A second Action is 2, a third 3. If I move my Orcs 3 times, that's 6 points! This is great if a certain unit has the chance to turn the tide of battle, but it will be to the detriment to the rest of your force. Turns go very quickly.
We played a game with 6 players and 50 stands in about 1 1/2, including the whopping 10 minutes it took to teach the rules.
All in all, highly recommended. Would be great for a convention game or campaign. It does have some similarities to DBA or HotTs, but I found Mayhem had a lot more depth and a fun, gambling element to it.

Great rule set. Any rule set that I can learn in 10 minutes and play efficiently in 20 has my vote.

Archery may be a bit too strong with the automatic kill on a 1, but that may have been the luck of the dice.

Definitely a keeper, in my opinion. Since I am currently painting up 4 stands of orcs I am glad it went well. :)
I think Greg rolled a 1 six times on a 20 sided die. I think that was something of a statistical fluke.

I think shooting is right on for a fantasy game. For the long bows, the general percentage to hit was 15-25%. And the auto kill was 5% after you successfully hit. So not so easy, but when you roll 1's on the wound dice, it seems pretty heavy. And since we were using volley fire because of the long bows we were rolling three dice to hit, and three to wound. Normal bows get 1 die and 1 die, unless you spend the points of course.

I enjoyed them a lot. It could get me to paint some of GW Elves.

It was probably a statistical fluke looking at Ken's math. I just thought there wasn't enough melee. Bows did a majority of the kills on the flank where Bill and I were opposed. And Greg was totally blessed by the dice gods last night.

I too really enjoyed the game and it is a keeper.

If we want more melee, maybe not having a river between the two forces would help. The terrain rules do slow you down quite a bit, and gave the bows more time to do their work.

Hmmm, bows did too much damage, did they?

Anyone ever hear of "counter-battery fire"? (i.e., target opposing bowmen)

I did target the opposing bowmen, and I did keep moving. The stream was about 4-5" wide. My ogres roll 2 d6 and keep the lowest roll. I was usually moving 1-2 inches a turn, and you have to completely clear the terrain with a 60mm deep base. 60mm is 2.36 inches. I had to keep rolling for movement for around 7 inches. Unless I get really lucky, its going to take 3-4 turns to clear that stream. Meanwhile 2 bow units are shooting at me, sometimes twice a turn.
Just sayin'.

Waaaaaahhhhhhh!
Of course, we could see what would happen with a Henry V army. A few men at arms and dismounted knights, and a grunch of longbows.

Yours is now the third blog to recommend Mayhem. I think others were playing it in 10mm as a replacement for Warmaster. I may have to further investigate. Right now I play Rally Round the King (RRtK) which I do like quite a bit. DBA and HotT never clicked for me.

Well, since you would be absolute fool(McClellan) or a megalomaniac(Napoleon) to fight a battle on a field with a substantial river running right through it, I agree with Bill. The river needs to go away. It could snake at a 45 degree or cut off a portion of the field, but not between, with no crossings.

Still I enjoyed the battle. And counter battery fire does work. I saw what happened to Jon and Bill from bows so I immediately used all my points possible to fire volleys without moving at Scott.