Fistful of Lead (in the Future) 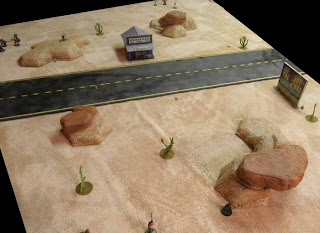 Lead Addict has been bugging me for years to take my Fistful of Lead Wild West rules into other areas. So, when I wouldn't get off my ass and do it, he took a turn at writing some stuff. After a few e-mail exchanges we got some basic ideas locked in that needed play testing. With most of my toys boxed up for the move, I had to play a system I knew by heart. So, Thursday the play test happened. 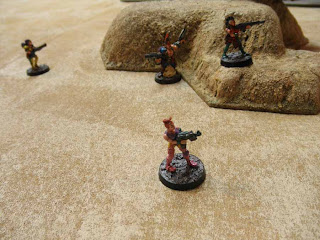 Gangers seek cover in the hills
The scenario involved 4 rival gangs hunting for resources (cleverly disguised as rocks) in the post-apocalyptic future. The gangs were balanced, but I wanted a variety of weapons to try out. 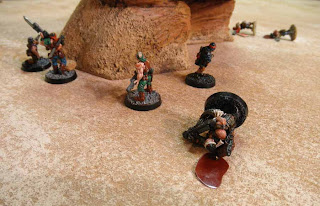 The big guy goes down with a shot to the grape.
Like original FfoL rules, I didn't want any record keeping, one die type,  and a minimum of gaming clutter on the tabletop. The game evolved into the usual jockeying for position until close range. There wasn't much in the way of cover (I wanted weapon testing, not cover). The automatic weapon rules worked great, simulating suppressive fire well, without alot of extra dice rolling. As with real modern weapons, it was pretty deadly and quick. Through use of treachery and kid luck the Boy came out on top. The rest of us were food for mutated three-headed vultures. 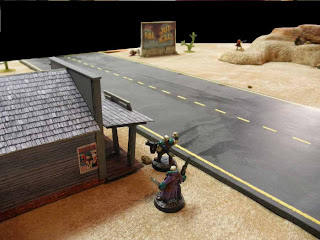 The desolate wastelands
Future play-tests will include vehicle, armor and more advanced tech. But that'll have to wait till after the move. 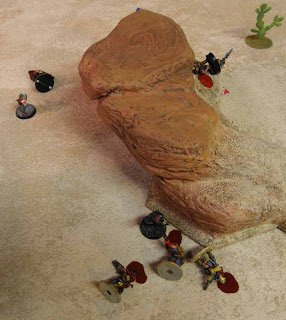 A neat use of the rules. I'll have to try them for my sci-fi skirmish.

I you can wait, I'm sure we'll have the finished product soon.
-J

I am very interested in these rules, they sound excellent.

Interesting. Are the rules obtainable, yet? I woul dvery much like to get my sweaty palms on them ;o)

On the Yahoo group, have some charts. But not a finished game.