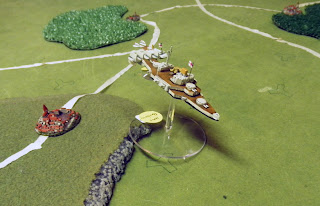 I've had both the Aeronef miniatures by Brigade Models and the rules by Wessex games for a while, but never played the rules. They seems simple enough, but maybe a little too simple, so I always used a Full Thrust variant to play with sky-ships. Like a lot of wargamers, I fell in love with flying ships with "Sky Galleons of Mars" back in the late 80s. The rules were a bit cumbersome by today's standards but the idea of battleships tooling around the skies stuck.
A tipsy elf told me I'd be getting the Spartan Games "Dystopian Wars" mega-fleet in my stocking this year. I thought I'd give Aeronef a last chance before I dived into DW project. 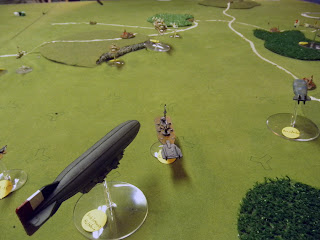 The scenario involved a German Air Task Force making a bombing run on the English countryside in hopes of knocking out an X-Matter refining facility. Spies weren't share which town exactly, and German maps were sketchy, so best just to hit them all. The British fleet was there to stop them.
We struggled with both measuring (centimeters) as the ships crawled across the table, and the turn sequence. You do half your movement, then after everyone's gone, the other half.
The German bombing was abyssmal, but we managed to knock out 3 towns by the end. THe ero for the German side was the little Hamburg. That ship took a pounding and kept on flying. In the end she was boarded and had to surrender. The English dogs scuttled her.

The brits had there own stalwart, the Exeter. I made it my mission to pour as much lead as I could into her, but never went down. After the German fleet lost it's flagship, we headed home.
If we played again, we decided there needed to be some changes. Inches! Otherwise the ships went too slow. One move phase. With the added movement, you could drop it down. Boarding rules were weird too. Otherwise a fun game easy to use for cons.
Posted by BaronVonJ at 8:43 AM

Just use Full Thrust and add the boarding rules from Epic.

Nice to see the old broads out on the table. still haven't even unpacked those full Russian and Japanese fleets yet.

These rules actually went quicker than FT. In some ways I liked them better. Can't wait to see what DW looks like.

Areonef is a lot of fun when you combine it with Landships! I always say MORE steam tech please! DW looks good. I checked it out the other day at the FLGS. The ships are much bigger than Aeronef's and look kind of Skycaptainy to me but they are still cool. I will probably get some and play DW as I do enjoy Uncharted Waters but then I may also use the fliers for Capital Units for WTNW too.