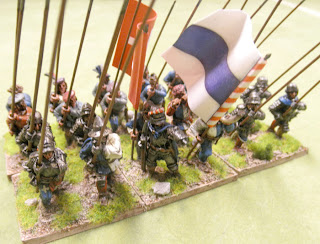 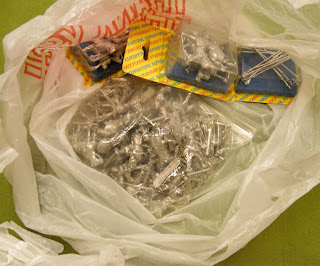 Unpainted Gendarmes waiting for rules worthy of them
Posted by BaronVonJ at 7:42 AM

You could do worse than to try Armati rules. My old club uses them for English Civil War and they give a quick, clean game with a real feel for the period. The rules stretch right back through the Renaissance and cover your forces.

Try White Mountain. It's C&C for renaissance. We just did a game of it with miniatures.

Armati - that brings back memories...

In addition to White Mountain, have you considered a mod of Sabin's Lost Battles for renaissance?

Mr. Retzer, you are a gentleman and a scholar.
-J

El Gregp,
Read some about lost battles, but sounded more like a simulation than a wargame. Be willing to give it a try if I can find it.
-J

Have you considered the IMPETUS rules? There is a free simplified version of the rules ("Basic Impetus") that is quite popular . . . and depending upon just what armies you have, may already be covered:

The free version is at least worth a quick read . . . and I understand that the full version has a lot more "command and control" and other richness to it.

Good because the Basic set has none which is why I never delved into it past the Basic. Alas I get paid but once a month, so I'll have to wait until the end of the month to pick up the full version.

How about Piquet? It's got simple combat and lots of fun command and control issues. Does use multiple die sizes though.