Spring and Summer have given way to Fall and soon Winter in Unkerlant. It has been a bloody campaign year for some, and a war of maneuver for others.
The Archy Duchy of Volborg has fallen back to it's traditional borders and allies. The loyal troops of Durmwald and the pious people of Helmgard will now join the Duchess in next year's campaign.
Zlobenia and Franistover have lost their earlier gains and now sit in each other's capital, unable to collect taxes or recruit for next year's battles. Will a diplomatic solution be in the making?
Prince Ruprect and his invading army of Borogravia have profited the most by our horrible little war. No less than seven of Unkerlannt's lands lie beneath the boot of of their Borogravian oppressors. But, in true Unkerlantian fashion, they recognize a strong leader when they see one, and will no doubt provide troops for next season's fighting.
When the Council of Electors meet over the winter, Borogravia will hold 2 votes, Volborg 1, and Franistover another. It takes a majority of 4 to elect a new monarch. It will interesting to see how the "non-allied" nobles vote. 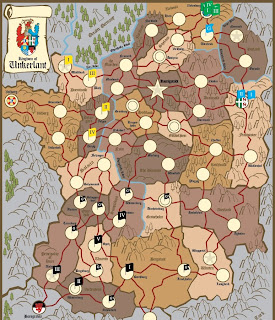 Posted by BaronVonJ at 9:56 AM

I didn't realize that you were the author of "Fistful of Lead" . . . I'm going to be using your rules at our local convention at the end of February.

I've just written a post about it . . . and found the link to this blog on the Fistful of Lead Yahoo! Links page.

Yep. It all started about 15 years ago when a jerk running a cowboy game at a local convention pissed me off and I decided to write my own. We've been playing it ever since.
Just drop a line to the Yahoo Group if you have questions and make sure to post any pictures you take.
-J