(I tried to shoot from the same angle to help readers better understand the battle. I created stands to fill in for actual miniatures, in this case quite a few. Some of the players actually liked them just as much as figures because they were easy to read. The two commanders, Wolfe and Ruprect were played by 2 gamers who hadn’t played the rules yet, but they were assisted by two who had.) 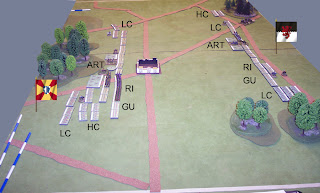 The battle began promptly at noon. With drums rumbling and horns blaring the forces of Borogravia and Volborg marched smartly out into the flat ground outside Salzenmund. The Duchy of Volborg, arrayed in their bright yellow, deployed outside the woods north of the town. They were led by the dashing General Wolfe, though young, a veteran of the many minor skirmishes that plague Unkerlant.
Borogravia marched from the south, led by exiled Prince Ruprect. Both sides had placed their cavalry on the flanks, with infantry in the middle and the guns massed at the center.
The forces were almost equal. Borogravia was down a few infantry regiments including the vaunted Dutch Guards, but otherwise the armies were the same both in experience and willingness to fight.
The Duchy of Volborg moved forward first. The cavalry on the right, led by the cuirassiers, moved out at a brisk pace to close with Borogravian dragoons their opposite. In the center, the artillery was still limbered and deploying. The 4th Infantry regiment invested the town of Salzenmund, ready to hold it at all costs.
On the other side, Prnce Ruprect had his cavalry on the left redeploy, with his hussars moving into the forest ready to flank any Volborgian cavalry that charged in. The cavalry on his right suddenly went into a full charge, crossing the field rapidly, but not actually engaging anyone. Early battle gitters? The massed artillery in the center swung left to bring fire one the Volborgian center in a feeble attempt to silence the Volborgian guns. 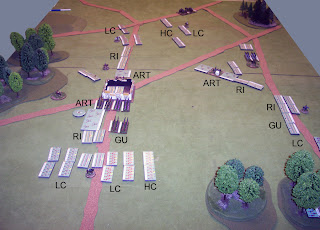 Next, General Wolfe refused his left flank. He knew his dragoons wouldn’t be able to hold the line against the Borogravian cuirassiers in front of them. He just needed them to hold long enough to get some infantry moved to back them up. In the center his guns were still not where he wanted them, but on the right his heavy cavalry was closing with the Borogravians.
Prince Ruprect sent in his heavy cavalry on the right. Assured of a quick victory, he was surprised to see his troopers driven back after a quick scuffle. Meanwhile on his left the light cavalry were getting nervous. The hussars broke from the over of the trees to hold the far left.
The next few moments would be decisive. Prince Ruprect sent a scathing rebuke to heavy cavalry commander, reminding him of the cost of any failure by his horsemen. The next charge by the cuirassiers, broke the Volborgian left. Three units were crushed and the Borogravians were now threatening an exposed Volborgian flank.
On the opposite end of the field the opposite was happening. Volborgian heavy cavalry had smashed the Borogravian left and were moving to encircled the infantry.
General Wolfe watched passively as his left began to unravel. He was forced to vacate Salzenmund to reinforce the flank. The Volborgian right, however, was fairing better, despite repeated repulsed cavalry charges. The Borogravian guard was holding the line.
The lines had swung from north/south to east/west. 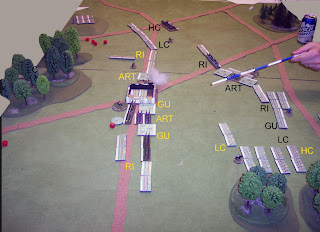 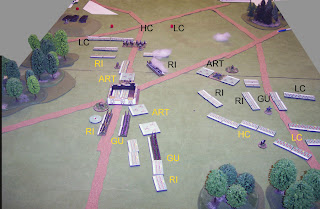 As dusk approached, the Volborgian forces suddenly broke. Wolfe was furious at first. This retreat was never ordered! He was crushing the Borogravian’s left flank, but Prince Ruprect was doing the same to him. Losses were almost the same for both sides. Anger turned resignation, as the order for a full withdraw was given. The retreat was orderly, and Borogravia didn’t have enough cavalry to give a proper pursuit. Prince Ruprect could have Salzenmund. Salacia was full of thieves anyway, and would have him bled dry in a few weeks. 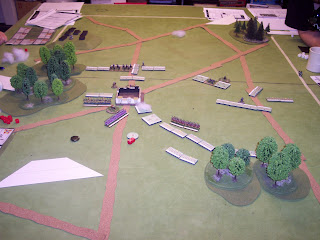 All in all a fun game. Can’t say enough great things about the rules, “Might and Reason”. Gave a flavor for the period without weighing down the speed. It became a cavalry battle. Only a few infantry regiments became engaged. The really interesting part will be how the campaign continues. Both are both lacking cavalry now, and battered. How far will Volborg retreat, and can/will Borogravia pursue.
Posted by BaronVonJ at 10:22 AM

Nice battle report. I like your little walled town.

I also enjoyed the battle report ...
and wonder what kind of logistic support the different factions have to recover strays, re-equip and recruit?
:)
A

Might and Reason has a great system for covering losses,etc. It's one of the few games I've found that takes everything into account. Do I hold back some of my cavalry to use for pursuit later, or commit all to help win the battle?
Volborg would have really got mauled if Borogravia hadn't lost so much cav during the fight.
-J