The Legion in Mexico, by GASLIGHT 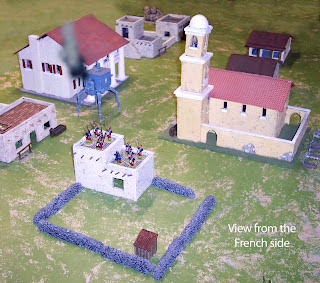 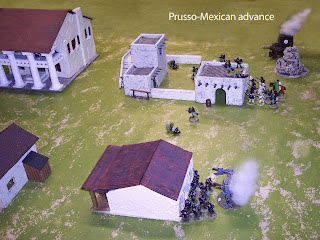 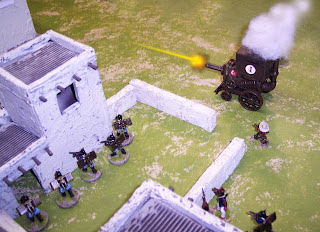 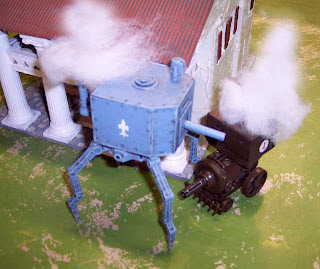 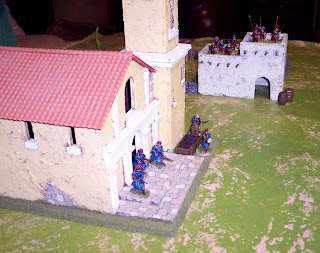 In the timeline of the real world, the French were expelled form Mexico in 1867. In this world they held out a bit longer. When the Franco-Prussian war begins in 1870, part of the German plan involves a small invasion of the French holding in Mexico...
Prussian spies have landed ahead of time and rallied some of the nationalist locals to bolster the ranks of the invaders with promises of Mexican independence. Airships have dropped troops outside the small village of Pocoloco. The plan is to capture the Governor, who's vacationing from heat of the interior, and the payroll. Guarding both is a small contingent on Legionnaires. What should be an easy operation, soon turns out to be anything but.
Unbeknownst to the Prussians, the village is guarded not only by the Legion, but by a group of Zoauves, a unit of French Regulars, and team of Marines. Backing them up are the Spyder, and the Wheel, two nasty steam powered contraptions.
The Prussians have troubles right off. They can't get their contraptions started. The Wespe (a flier), the jaguar (a volicepede) and the vaunted killenkanner spend the first couple of turns just trying to get started.
Meanwhile the Rokkittruppen land scattered all over. They isolated ones are quickly picked off by fire from the governor's house. This forces a morale checked which they fail and are forced to retreat.
The French wait as the Prusso-Mexican force enters town. The Spyder and the Wheel spring to life and begin to lob shells and electro-galvanic lightning into there midst. The half the Mexicans flee, never to return. But, in a bright spot, the Mexican contraption, begins an end run around the French left flank. It manages to pepper the windows of the governor's house, killing a few Legionnaires. In true legion fashion, the ignore the casualties and fight on!
The Prusso-Mexican forces have now got within charge distance of both the church and governor's house. With the Wespe finally flying, it begins dropping bombs on the church yard. During the mayhem, the Prussian regulars assault the church. In vicious hand-to-hand fighting, the Prussians win, and force the French out. The French quickly rally and retake the church.
Meanwhile, on the French left, the Spyder's constant bombardment has taken it's toll. All of the Mexican allies have routed, their contraption a burning hulk. The Rokkitruppen try one last charge and are cut to ribbons. The survivors leave the battlefield.
It was a good fight. We (the Prussians) should have been more cautious advancing. We had some terrible morale rolls and the French did some darn fine shootin'.
Posted by BaronVonJ at 11:15 AM