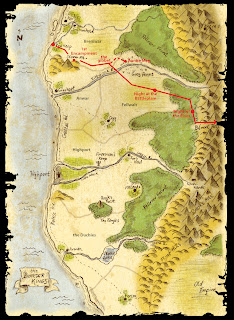 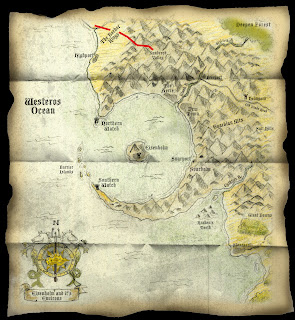 After a long absence from straight up RPGs we started a Warhammer Fantasy Roleplay campaign. I always liked these rules, but hated the setting, so I made my own. Our characters to this story consist of an elf outlaw, a hedge wizard, a halfling fieldwarden, a squire, a hunter and an elf wizard's apprentice.
One of the more interetsing parts of a campaign is how it starts. The standard is to have everybody meet in an in. I had them all meet as inmates of the same dungeon in a backwater kingdom.
Most of the charges were misunderstandings or trumped up charges, but their fate was the same: "we'll release you if you take on this expedition".
The leader of the expedition to "find an artifact that will unite the border kingdoms", is Rulf, brother of the monkish king.
Each PC was given amulet that will give them safe passage through the kingdom. Almost immediately a peasant from a distant village begs them for help with some missing livestock. "Have your magistrate deal with it", was Rulf's answer a the PCs left.
The first night was spent in the shadow of Storm Mountain where the PCs watch two storm giants duel in the clouds.
The second day found them at a crossroads where the saw a gibbet with a corpse in it, and sign "wizard" on it. Birger, our hefty halfling quickly spotted a ring on his skeletal finger and snatched it. The group also found they were being followed. After a tense few minutes, it turned out only to be the earlier peasant still begging for help. Rulf gave the PCs 2 days to help the peasant and meet him at the ford for the River Rittenroch.
By nightfall, the PCs were at the horribly impoverished village. Soon after, cries went up about a missing sheep and the culprits getting away. Our PCs followed the giggling offenders to the Grey Fenns, an imposing swamp.
Several pit traps and grey bathes in the muck later, the PCs found a crumbled tower. Birger managed to set of a trip wire and alert the 2 goblins within. After a killing one, the other woke "Aunite Meg", a female Troll who was glad to have new visitors.
The PCs looked like they were done for till Dullwin, their Elven Wizard's apprentice manage to put a sleep spell on her. A quick chop from Squire Corbin's sword detached her head, and into the fire she went.
The grateful villagers offered the few coins they had, but the pCs decided the gold they captured from the tower (and the local magistrate's armor) was enough.
The PCs met up with Rulf and his men at the ferry. The ferry itself was too small to carry everyone across at once so Rulf, his men, and the horses went first, followed by the PCs. Halfway across, Armed men appeared on the far side bearing the colors of a rival kingdom. In a heated exchange Rulf killed the captain, the group was forced to ride hard across the Battleplain, a haunted place normally avoided. After a hard ride the PCs spent the night on the farside of the plain. Our two magicians were very uncomfortable in this place. Soon they were visited by an ancient wight and an entourage of 5 skeletons. Squire Corbin dispatched the wight with a mounted charge and PCs left soon after, hounded by enemy troops.
The group managed to lose their pursuers in the Fellreev forest only to encounter a kithband of Elves. The elves escorted the PCs (much to Rulf's chagrin) to the eastern edge of the forest with the ominous warning that war was coming.
The PCs headed into Blood Pass, site of an ancient battle between the forces of good and evil. They spent the night in a ruined watch tower, where they discovered a battle had taken place. They also found amulets similar to the ones they were wearing. Rulf admitted 2 such expeditions had gone before, never to return.
The next day went uneventful til they were ambushed by a loathesome Bugbear and his goblin henchmen. Several were wounded and one of Rulf's men killed. Again, a mounted charge by Squire Corbin finished the affair.
Next stop, the Sundered Valley!
Posted by BaronVonJ at 8:58 AM