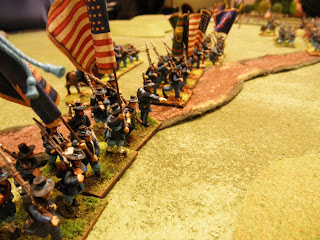 One of my favorite periods at my favorite scale. John brought the minis, I provided the table. Since every Thursday is basically a mini convention at my house, we used Black Powder. Quick to learn, quick to play and generally gives the right feel. 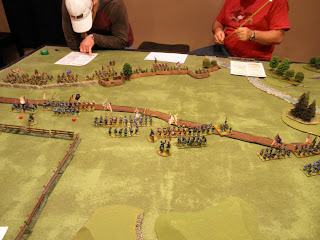 The scenario was a Union assault on the far left flank of Rebel entrenchments. The Rebs were outnumbered almost 2:1, but they had the works to defend, and an extra gun.
The Union attack faultered from the start. Our right (yes, I had to play the dirty Blue-bellies), sputtered to a halt. I'm pretty sure the Brigadier was drunk. The left closed too soon thanks to a blundered and was chewed up and spit out early. That left me with an uncoordinated attack in the center. The few that made it over the wall were decimated. 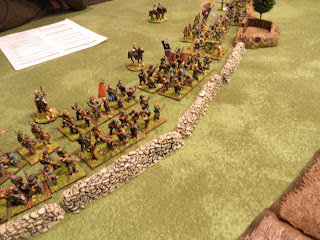 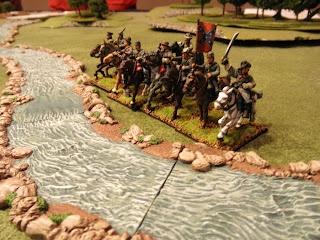 Meanwhile the REb cavalry was able to sweep in from behind (that's the way they like it!), and break up the right side of the attack. 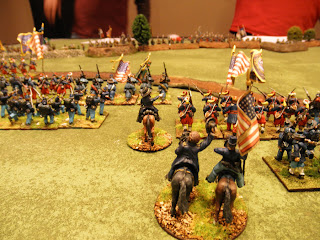 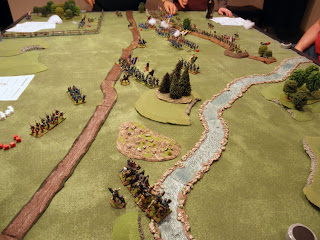 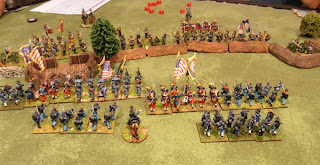 As usual, a good game. We finished in about 2 hours. Might even get me painting some troops.

On an altogether sad note ( I don't Facebook, so this my shout out), long time friend of a few of us Basement Generals, Tom "Big Finger" Bajt passed away a few days ago. I knocked back more than a few last night in his honor.
Tom was born with a disfiguring disease that would have killed most people long ago. We grew up in a less PC time. He dealt with alot of crap. He could have let it get to him, bring him down. But instead, he turned out to be one of the most positive people I know. He was a fighter, and as such, surely Odin prepared him a table in Valhalla. Save me seat, pal.
Posted by BaronVonJ at 8:28 AM

Sorry to hear about the loss of your friend last night. I enjoyed the stories that you and Lindsay were telling in his favor. Take care

That was a lot of fun. No complaints outta me on BP.

Sad news about your friend. Seems like a good game was a good way to honor his memory.

So sorry to hear of the loss of your friend. I'm sure he'd have been looking down enjoying your game with you too!