Emperor Xorgon, an attempt to kill Our Hero Dash Dixon, blew up Moon 6. He realized too late that that not only had Dash made a last minute escape, but Moon 6 was full of Unobtainium.
Chunks of the precious mineral have now fallen to the planet Gorth. Emperor Xorgon and elements of the Imperial Navy have landed to grab as much as possible. Little does the vile villain know that Dash and a group of ragtag survivors of Moon 6 have the same plan!
There were five spots where the Unobtainium had landed. They were scttered around the ancient carcass of giant Gorthian god.
There were 4, count 'em 4 players on each side and the Boy acting as the Gorthian Natives for a nine player game of Fistful of Lead. 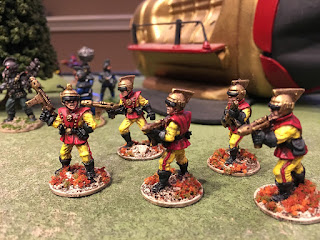 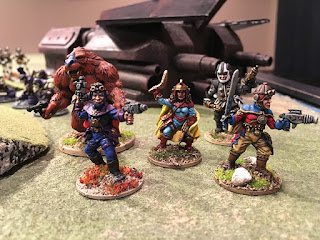 The Robot Legion
The Natives seemed to sense the evil intentions of the Imperial Navy and attacked them first. They were soon repelled my blaster and Mazer fire with heavy losses.
Dash, with help from the Robot Legion and the Subterrans of Moon 6 grabbed two chunks right away and delivered them to his ship the Dauntless.
The Robots swept aside Xorgon's mercenary pirates and was closing on the Navy ship, where they two had two chunks stored away. 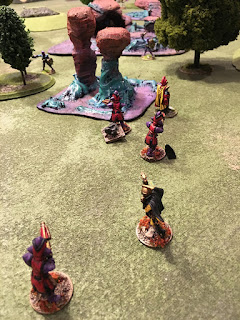 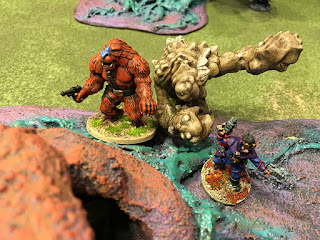 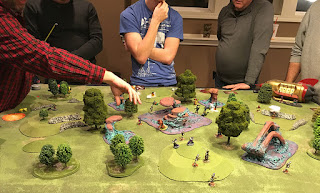 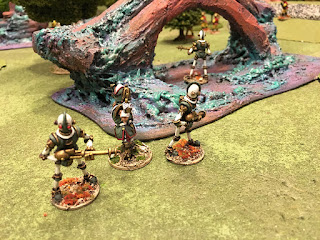 In the middle, the native's were down to one. They had already released a rock monster on scene, but it was dispatched quickly by the duel laser pistols of Lance Vortex. But they had one last trick, the Gorthian Blood Worm!
It ripped through the surface devouring the fair Steela Starfire whole! Even her sonic boomerang was no match for the tough hide of the Worm.
It was only through the combined fire of the heroes that brought it down. Dash quickly cut the beast open to free Stella.
The Imperial Navy was driven back. In only 2 1/2 hours the battle was done. Dash and his crew the victors!
This was another successful play test of FfoL: Wastleland Warriors, and shows the versatility of the rules. We had robots, giant monsters and a variety of weapons. It went smoothly. Thanks to everybody that came out. Last night's pairing included a lovely beer from St Louis. 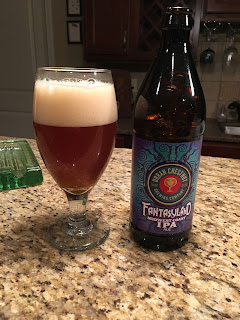 It's been awhile since I got out Super System. When we last left our modern campaign, Emperor Ape's space station had been blown up. Important elements have fallen all around Central City.
Villains and Heroes have moved in to grab them.
There were 5 chips placed around the board, with 5s, 10s and one 20 on the back. Players weren't allowed to see how much they were worth until the end. 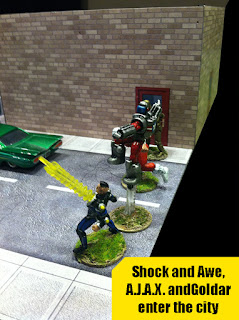 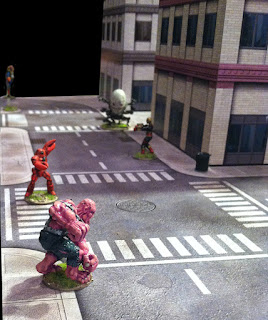 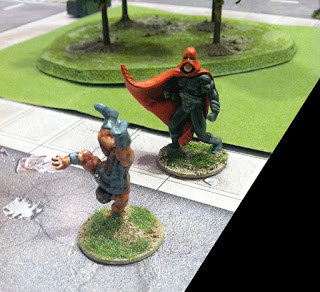 The Crimson Cowl and Flea approach from the park. 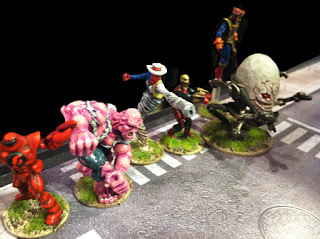 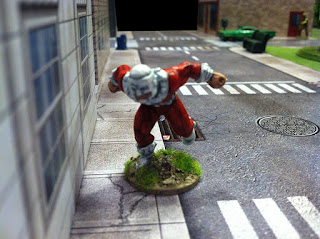 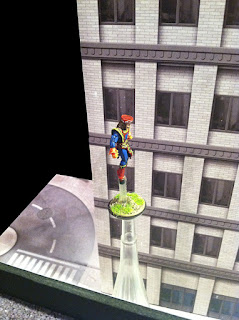 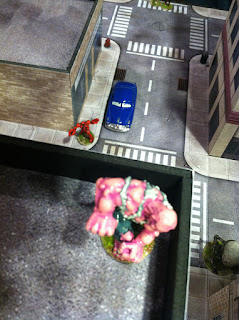 Behemoth takes to roof, only to me mind melted by the Crimson Cowl 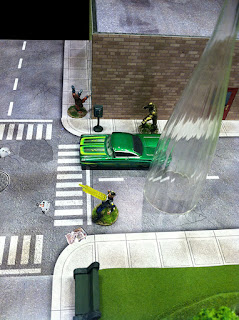 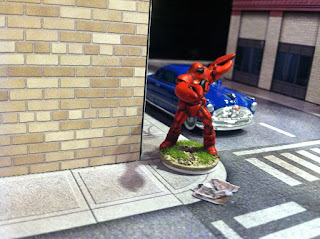 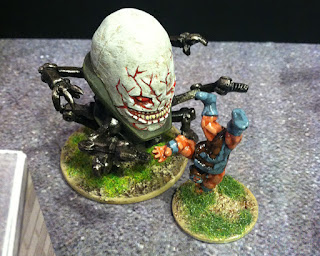 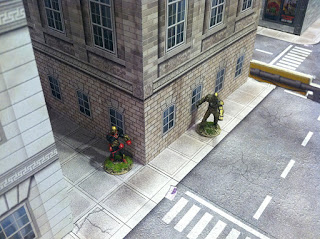 Goldar has a surprise coming from Killshot 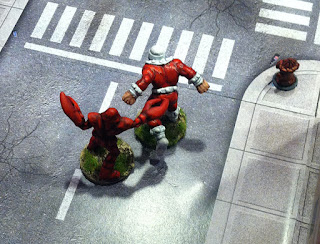 Awe goes down to Snapper 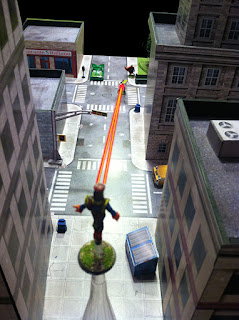 "You just got Jacked!" 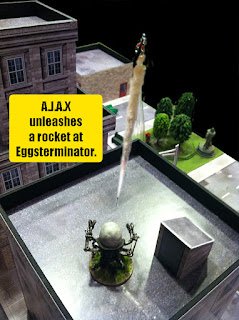 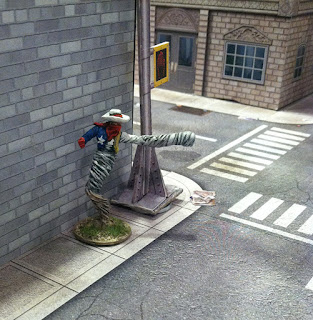 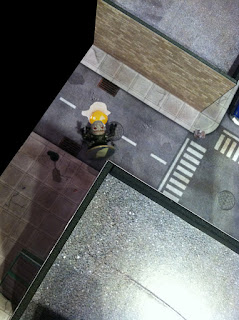 It seesawed back and forth, but the Flea was able to bounce around and grab 3 objectives. It ended with a fall from a roof for Eggsterminator (que Humpty Dumpty rhyme) and only One-Eyed Jack and Texas Twister left for the villains. The heroes walked off with the most important tech.
Stayed tuned for the next episode, True Believers...
Posted by BaronVonJ at 9:37 AM 5 comments: 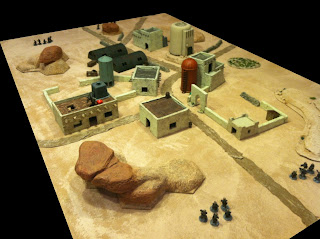 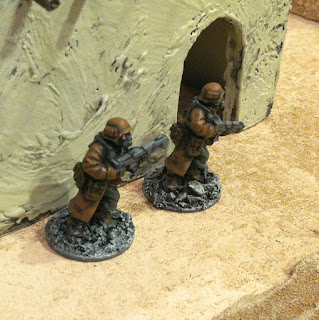 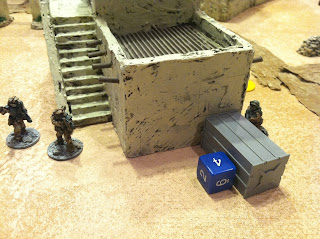 Each player controlled 5 models with the two sides representing the Union and Rebel sides.
Rebel forces had to blow up one of the 6 objectives, while the Union forces had to contact 2 objectives.
Neither side knew what the others mission was, which made things interesting for our small forces.
It was a fun, and more brutal game than usual. We lost 4 of our 10 men. About the same for other side. Both sides pulled off their missions, so I guess it was a tie.
Still, a lot of fun.
Posted by BaronVonJ at 12:22 PM No comments: