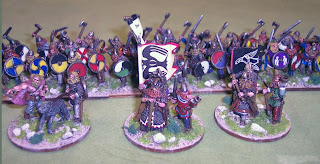 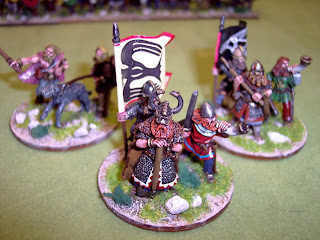 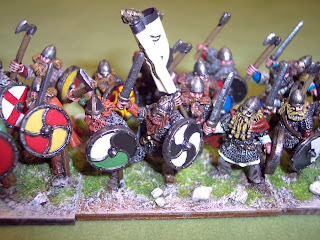 Finally got these guys re-based. Still have a lot more to do, but thought I'd show how they're coming along. The minis are all Foundry. They haven't got they're dull-coat yet.
Posted by BaronVonJ at 6:44 AM 2 comments: 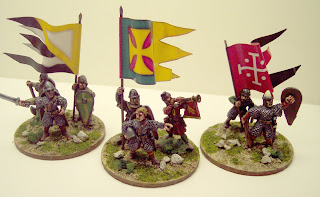 Norman commanders, part of an upcoming Dark Age game. All figures are old school Foundry.
Posted by BaronVonJ at 7:24 AM 3 comments:

Taking the field for the upcoming fight is the 2nd Infantry Regiment (Zweck's Own). Old Colonel Zweck is veteran of Unkerlant's many internal struggles and staunch backer of the Volborg cause.
Posted by BaronVonJ at 10:47 AM 4 comments:

Ruminations on turning the Big Four-Oh

"Or a Life Spent Wargaming"
This Saturday I turn forty, and like many in our weird little hobby, ponder how I spent so much time on booze, cigars and little lead soldiers. My earliest memories are of shooting plastic army men from Lincoln Log forts with dart guns alongside my Dad in his little apartment on the weekends. He bought the 1/32 Airfix soldiers at the now long gone Pappenfuss Hardware here in Independence. It was the painting guides on the back that got me interested in actually painting them. I was already constantly drawing, so I added painting to the mix.
Then in 1981, two world changing events happened. First, Bob Angotti introduced me to Dungeons & Dragons (thanks Bob, for a future life spent in the basement) and second, that wonderful tome known as the JC Penny Christmas catalogue came out, offering a box of Grenadier AD & D lead miniatures complete with paints and a "How to Paint guide". I spent that Christmas holiday at my grandparents in Arizona feverishly cranking out fighters and wizards. I created my own rules for combat, and was hooked.
There were two places in town that sold miniatures, and like a addict, I spent every dime I scrounged together on miniatures and begged my Mom to drive me to King's Crown and Yankee Doodle. When I wasn't painting or playing, I was thinking about painting or playing. It was at Yankee Doodle that I got to play with real grown-ups in a real wargame. Both stores are long gone, but I still think of them.
During Junior High and early High School, time that wasn't spent on girls or sports was spent painting and playing, with a lot of time lost to Villains and Vigilantes (I was a comic fiend, too). Later High School and college saw me spending more time on alcohol and girls than my little friends. They went into several large boxes and didn't come out again til I got my first real job at a large greeting card company (where I've been ever since).
Most of my gaming buddies had left or stopped playing all together. I played most of my games with Ken (Lead Addict) until I discovered Kansas City has a large wargaming community. Now I had the money, a huge group to game with and best of all, a lovely wife that tolerated and appreciated my obsession.
The whole exercise of writing this out, I guess, was to tell myself it wasn't time wasted, right? Most of the friends I have today, I got through the hobby. I play board games every Friday with my wife, daughter and son. My kids have grown up next to the gaming table with their Dad (my daughter knew the difference between olive drab and khaki at an early age). My wife has said on several occasions that she doesn't have to worry that I'm off at a bar or a strip club. She knows I'm down in the basement.
So here I am. Forty. It hasn't been bad. And there's thousands (yes, thousands) of little soldiers waiting to give their lives for their uncaring god who gave them painted life. Or not.
Posted by BaronVonJ at 9:32 AM 8 comments:

Some recently finished reload markers for ECW/TYW.
Posted by BaronVonJ at 7:28 AM 3 comments:

It is with great joy Unkerlant announces it has been honored with Order of the Goblet, by the Reich Duchy of Beerstein. As soon as Unkerlant crowns a new monarch, the award will be passed on to them.
Huzzah!
Posted by BaronVonJ at 7:50 AM 4 comments: 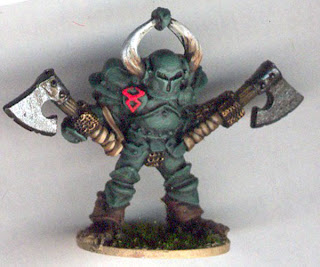 Came across a horde of Old Citadel lead. This was one of my earliest figs I fell in love with. A little repainting and ta-dah!
I plan to use this guy and his chaotic buddies in a Song of Blades campaign. Speaking of which, Song of Deeds and Glory (the campaign rules) just came out yesterday!
Posted by BaronVonJ at 7:13 AM 4 comments: 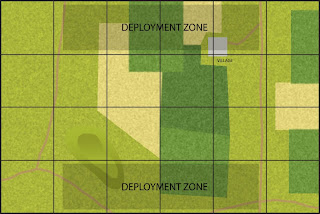 The Arch Duchy of Volborg has chosen to fight the battle of Vollenbeck on thiese green fields. Now for the date!
Posted by BaronVonJ at 2:32 PM 3 comments: