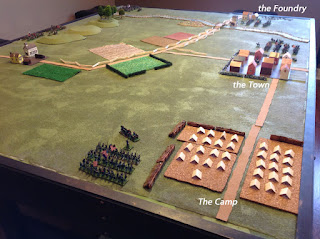 Don't get me wrong. I love Fire and Fury. It is my rules of choice for the Civil War. But, when you have 6-8 people over, unless you have a Saturday afternoon and possibly evening, you're not going to finish. So, we needed a solution to have an enjoyable game in the 3 hours we have every Thursday.
For this game, I used the ACW scenario in the BP book with a few modifications. We had 4 commands a side instead of 3. I halved all measurements for the 15mm scale. 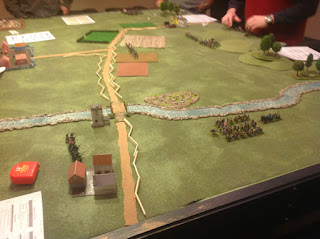 My group is used to F&F, and the slow slog it takes to break a unit. So, the careful management of troops you need in BP took some getting used to. Units can blow up quick. Flanks can fall in a turn. But, that's what we needed for a game.
The scenario involves an army of Rebs catching the Bluebellies napping. The Union troops have to get their scattered forces together really quick if they want to hold off the Rebel horde. The Confederates have three objectives: the foundry, the town and the camp. Any one is a minor victory, but all three is a triumph of generalship. 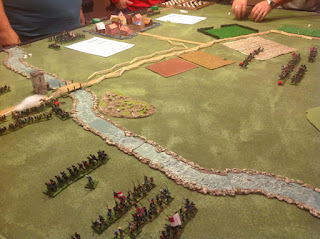 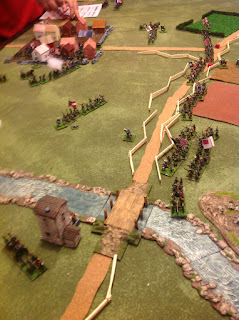 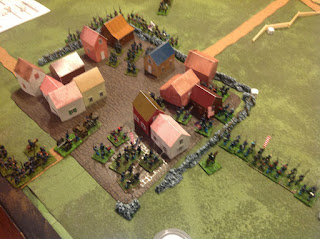 Union picket troops sounded the alarm by turn 2. Meanwhile, both Rebel flanks (except my troops, of course) maybe huge gains. It looked like it would be a quick game, with the Northern forces unable to get their troops on the table before they were swarmed.
But, you know where this will go.
THose pesky skirmishes managed to slow the Reb center for half the game. The foundry fell, but it took forever to get the Reb left flank swung around to hit the town. The Confederate right wing commander got hisself outflanked by bypassing the camp, and shot all to hell. What looked like an easy victory was become possibly a draw at best.
After 2 1/2 hours we called it. A minor Southern victory.
Yes, we missed things, and did things wrong, but Black Powder turned out to be what I wanted it to be. A quick, fun game with a definitive outcome. Now, if only Lead Addict will finish his Nappies...
More at Curio Clashes
Posted by BaronVonJ at 6:56 AM

And finish I shall. Only 4 Cav Units, 6 Cannon, and 8 Infantry Units to go on the French. Should be 2014 sometime.

Even though I totally botched things at the foundry (lovely rolling as usual), I liked the flow a lot. While I do have some time invested in RF&F, I agree there is a need for something faster. Looking forward to doing this again with the 25s.

You can use the troops you have w/o rebasing.

I too liked the flow. Like any rule set this is going to take some time to develop proficiency. Most rules were pretty clear, I am still struggling with H2H results. That seemed a bit convoluted.

Perhaps I should actually read my copy of Black Powder??

Thanks for the batrep. Is it unusual for the game to only last two turns? How long was the game in real time?

It was actually about 8-9 turns. some go faster than others when you are only moving or only firing.