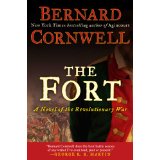 I like to alternate between history reading and Sci-Fi Fantasy. I had finished Red Country so it was time for some history. Okay, historical fiction, brought to me by an old favorite, Bernard Cornwell of Sharpe, Saxon Chronicle and other fame.


The Fort is set in the time of the American Revolution, or the American War of Independence as it's now mostly called. A British force of fewer than a thousand Scottish infantry, backed by three sloops-of-war, sails to the desolate and fog-bound coast of New England. Establishing a garrison and naval base at Penobscot Bay, in the eastern province of Massachusetts that would become Maine, the Scots—the only British troops between Canada and New York—harry rebel privateers and give shelter to American loyalists.

In response, Massachusetts sends a fleet of more than forty vessels and some one thousand infantrymen to “captivate, kill or destroy” the foreign invaders. Second in command is Peleg Wadsworth, a veteran of the battles at Lexington and Long Island, once aide to General Washington, and a man who sees clearly what must be done to expel the invaders.

But ineptitude and irresolution lead to a mortifying defeat—and have stunning repercussions for two men on opposite sides: an untested eighteen-year-old Scottish lieutenant named John Moore, who will begin an illustrious military career; and a Boston silversmith and patriot named Paul Revere, who will face court-martial for disobedience and cowardice.

John Morre would go on to be instrumental in creating the Light units, like the 95th Rifles, famed throughout the Napoleonic Wars. He faced the green coated Marine units at Penobscot Bay, the only effective ones on the American side. Hmmmm, maybe that's how the Brits got their green coats? Moore would die in the Pennisula and Corunna.

The book does not paint a pretty picture of Paul Revere. He would go from local hero to legend thanks to the famous poem. But, like so many legends, history paints a different picture. I have read several several articles that back Cornwell up on this.

IT also makes you rethink the idea of the citizen soldier. The patriot of legend. When this book takes place, most of those soldiers were conscripted or shanghied into service. Very few volunteers. It wouldn't be until later, we had decent enough troops to stand up to the British.

It was a great read, and it takes everything in my power now not run out and buy enough AWI stuff for a Black Powder game.

Posted by BaronVonJ at 8:53 AM

I felt the same about his 4th Archer book about Poiters. HArd not to build a French and English Army for some Chevauchee!

THis book was interesting. I knew from the first how it would end. Like watching a slow motion car werck.

While i did enjoy the Sharpes series - I do have to admit to being more of a francophile - The British would like to attribute our own success as a nation to the dubious fact their navy protected us? I am not sure since he (Cornwall) is a british author I would put much stake in his claims of the illegitimacy of American Patriots. However we should recall that this soverign British nation has done a pretty good job of hounding Scotsman and Irishman over the centuries as well its emerging reputation in Africa -- Wonder how he would write a novel about the Mau Mau rebellion - which by the way is what shaped our current presidents opinions on some issues the big O's grandfather spent some time in a British Concentration camp during that rebellion.