I've played it. I love it. Now, for the figs. I mentioned in an earlier post I have miniatures for this period in 4 scales. An appeal to the internets went out. I have costed all possibilities (6mm & 10mm winning out). But, it really comes down looks on the battle field doesn't it?
I mounted up bits and pieces on blanks just get a visual. Disregard the mismatched troops. I also didn't want to pry the little 6s off their bases just yet so use you imagination. They all take up the same footprint, except the 15s which I put on 40mm bases.
The results: 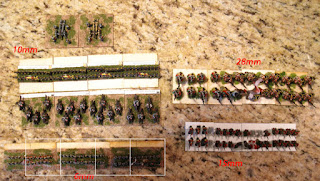 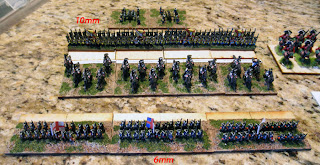 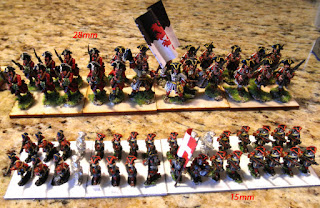 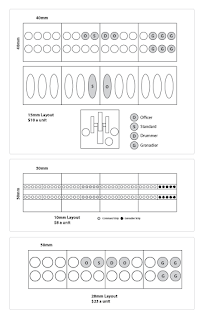 Proposed basing.
All can be used for multiple rules sets (Might and Reason, Black Powder, Maurice), so that's not an issue. They all seem to give the mass you want from the period. The 10s especially, and as you can see, I already had the 10mm Cavalry and Arty based right so that would be a time saver.
28s and 15s would give you more place to play in the Imaginations realm to pull off whatever made up uniforms you have.
Blogosphere, opinions? What would like to play with?

The BG's on't paint up many, with a few exceptions, so its really on you. I have always liked your 10mm guys, and they have a bunch of 'flavor' but still look the part. So that or 28's would be my choice.

I will paint these. I like the rules, and the uniforms are way more easy to paint. :)
I guess its between 10s and 28s for me also. The 10s will be cheaper and faster. The 28s would look great.

Who makes the 10mm figures?

Might I suggest that you consider the lovely, elegant RSM95 25mm SYW figures?

I love those figures, but that line was never finished. There is just too much you can't get, and other manufacturers don't really mix with it very well.

Jeff. With my OG discount I get similar prices. Those figs you mentioned, though lovely, are a bit "old school" for my taste. And I'm sticking with Marlburian era not SYW. Uniforms way easier to paint.

I agree as to WSS being easier to paint than SYW. I have WSS 28mm Bloodaxe armies . . . but their sculpting style is not really compatible with any other manufacturer . . . so OG is probably your best 28mm option.

I like the 10s myself, enough detail to see and one still gets the impression of massed troops. What scale for this era is currently most prevalent in your unpainted hoard?