Campaign for the KIngdom 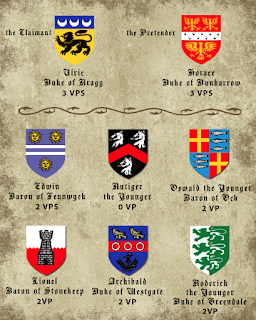 Once again the battle lines were drawn. Edwin, Baron of Fennwyck, carried the banner as lead claimant to the throne of the Kingdom. With him were the untested Archibald, Duke of Westgate and Roderick the Younger.
Across the battlefield stood Ulric, Duke of Kragg. The sturdy northlander brought with him Lionel, Baron of Stonekeep, and the crafty Horace, Duke of Dunharrow. Both sides brought their men, their loyal retainers and those unfortunate few scooped up from brothels and bars, forced to march to their probable doom. 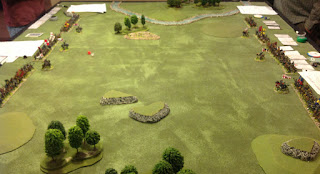 Ulric moved first. His whole battle line charged. The orders had been for steady advance, but seeing their leader charged forth, the men put the spurs to use. This, of course, broke up their pretty battle lines, with the more fleet of foot outdistancing the slower foot knights and pikes.
Edwin had more luck keeping his men in line. While the other side spent precious time redressing their ranks, Edwin trudged forward. 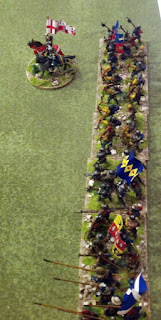 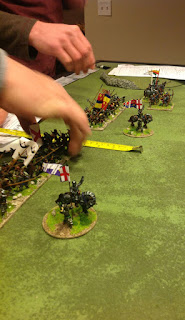 Edwin slogs forward
Both sides had to retract their lines to avoid rough terrain on both flanks. Archibald made the poor choice of splitting his force to hug opposite sides of the river. His exposed men became fodder for Horace's archers. 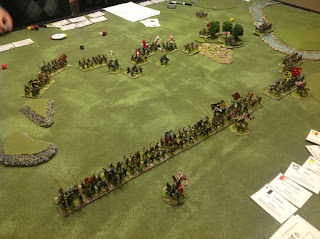 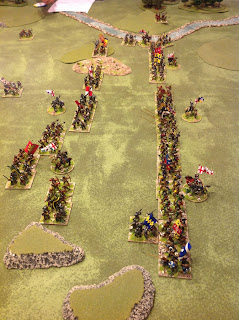 The lines prepare to meet 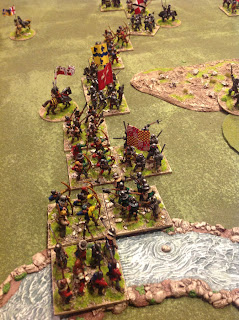 Trouble at the river
When the forces met in a great clamor, there was great slaughter. Ulric's men fought like the Lion in their standard. The drove back or killed most of Edwin's men. It looked like a quick battle.
But Lady fate would have it different. Men were dying on the flanks. Lionel and Roderick traded losses while Archibald finally regrouped and struck down some of Horace's men.
Just when things seemed in the balance, Edwin's men decided they had fought long enough. In the route Edwin was captured. Ulric had the claimant's head struck from his body. Now Ulric rode for the capital and coronation.
But not all was right in his ranks. Horace felt slighted for Ulric's clemency towards Archibald. Horace's men had died at Archibald's hands. Ulric would not claim the throne easily.....
As usual, the rules were Flower of Chivalry. The figs were Old Glory (much maligned company, but WoR was one of their better lines).