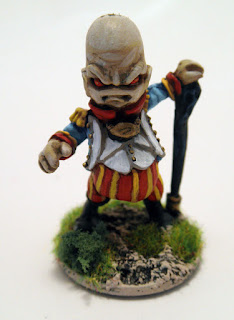 While staying home trying to shake a nasty bug, I actually squeezed in some painting time. Meet the Emissary. In case you missed the GASLIGHT game I posted, "the Visitor", I'll mention the the storyline so far in our alternate history of the world.
I craft from another world has crashed in the middle of a nearly worldwide conflict being fought on 1880s Earth. This Visitor was first found by the German Empire. Since then he has been aiding the Germans with technological advances which has given them the upper hand in the conflict, much to the chagrin of the Nefarious Professor Nightshade, whom until then had been their main weapon supplier.
Little do the Germans and their allies know, but heir Visitor is actually an intergalactic space criminal and key player in a much wider galactic conflict. This Visitor did not crash, but was shot down by this little fellow (not little, he's about 38mm). He has now presented himself to the British Empire as the Emissary, and promised aid to battle the Visitor. 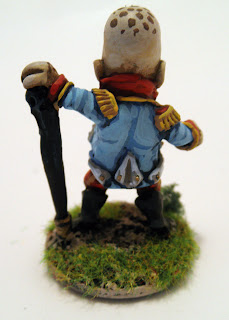 Be even the elated Brits don't know that a thousand year war has been fought between two factions and spanned most of the galaxy. Both sides have been drained of resources. Earth and all it's plentiful minerals and manpower are to play a part in a much larger drama. 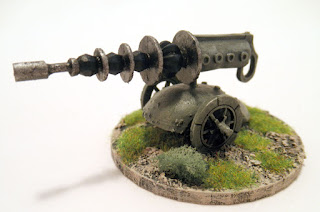 oh he is fun! such attitude :)

More brilliant madness from the bench of Bob Naismith, and some inspired painting on your part, Baron!

I remember Russ saying to Bob on the phone, "I need some Supreme Alien Commanders." That was it. Then Bob just produced that brilliantly mad box of cool aliens. Nice.