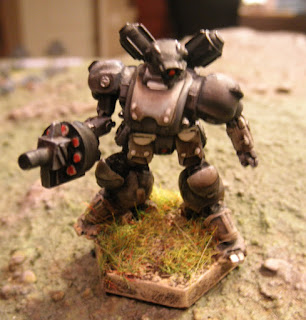 Basementcon-con2, that mini convention in my basement is now over. I didn't take as many pics as I should have, but here they are.
Thursday: Gruntz 15mm SciFi
Lead Addict brought over his horde of 15mm Sci-Fi minis for a playtest with the group of Gruntz. I have read thru Gruntz a few times and marveled at how simple they looked. We had had a short playtest before that didn't go well. Lots of shooting and no results. We had to be doing something wrong. The Gruntz website has nice videos on game play, which helped. 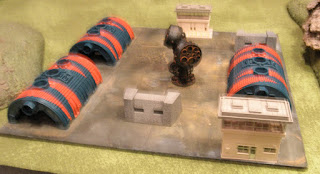 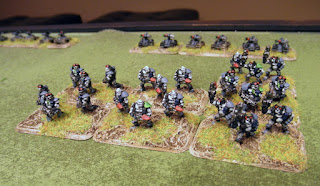 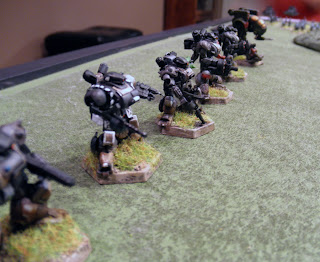 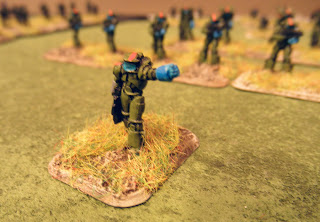 Human leader
This was battle over a Hyperspace listening post. The opponents would be humans on one side vs alien mercenaries. The reviews I've read have Gruntz as small affairs. For this 8 players battle we changed the rules from single based 15mm figs to whole stands marking kills with a tiny d6.
After a brief explanation of the rules, (which turns out is very similar to a game I've never played, Warmachine) the fight unfolded quickly. You roll 2d6 adding your shooting trait trying to make or beat your opponent' armor rating. A successful hit means you roll 2d6 with your weapon's damage trying to match or beat your opponent's soak value. Easy. 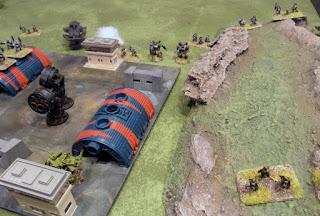 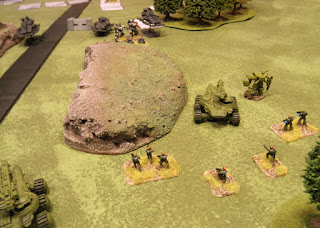 Everyone picked up the rules by turn 2, but we found the missile rules devastating and changed on the fly. Vehicles and troops were dropping like flies. The mercs seemed to have the upper hand. Then the humans destroyed most of the merc's armor and things swung in favor of the humans. That when it ended. I think most found it fun. We might even try a moderns game with them.

The brews for the night's tasting. A Romanian pilsner Timisoreanna. Very smooth. Reminded me of Pilsner Urquell.

Then, the polar opposite. White Hatter by a New Holland. Wow this brew had a bite. Not a fan at all. It was hard to get anyone to taste it after they saw my face. Kinda like when the milk goes bad and you ask your wife, "hey, smell this?".
More AAR tomorrow.

Posted by BaronVonJ at 8:01 AM

Baron- Great troop shots- I love those Mecha!How do you like the Gruntz rules?
Cheers

Best we've tried so far for 15mm. Still have a few more to try. Like I've mentioned in previous posts, we have a large group. So, a rules set has to handle that.
-J