the Legion in Mexico-the Crossing 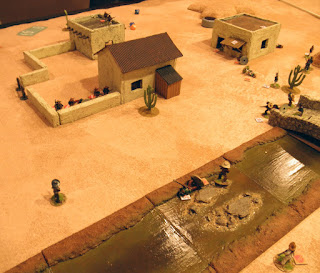 I slowly slog away at Fistful of Lead-Horse and Musket. I need a few playtests, not of the rules, but of the scenarios. Lat night's game was to try out the age old wargame favorite, "Take the Bridge". The hated Legion of that French Usurper Maximillian hold an important bridge. The brave Revolutionaries must take it for the advancing column behind them.
The odds were 4 to 3 in favor of the attackers. In hindsight 3-2 would be a better ratio, but we had 7 players, so there.
The Legion had an easy plan. Stay behind cover and pick off the insurgants. We knew this. We sent a few brave souls forward to make the Legion empty their muskets. It worked. There was a mad charge across the bridge and it looked like a quick game.
Then, we proceded to lose every melee combat. In FfoL hand to hand is very deadly but not always a given for the attacker. 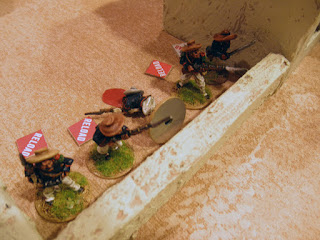 Things look grim for the Legionnaires. 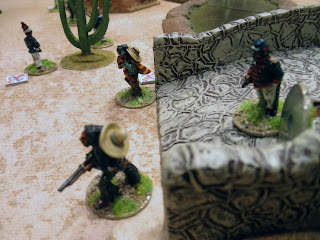 The bridge is taken 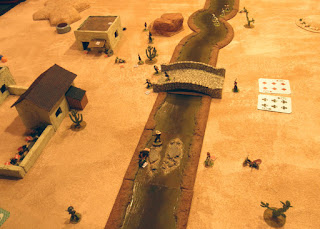 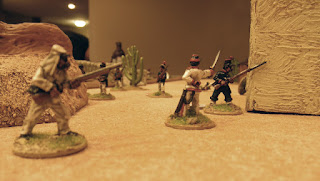 Forward men! There's only a guy with red pants to stop us!
At the end of hour two, it was "No mas". The Revolution was quelled for now. This was the first Legion victory since I painted them many moons ago. Due mostly to man named "Senor Pantalones Rojo". This Legion officer must have killed at least 5 guys single handedly.
To those patiently awaitng "Horse and Musket", soon my pets.......
Posted by BaronVonJ at 8:03 AM

Hi Baron, I'm a fan of Fistful and have been playing it with a few friends of late. I've also modified it for my sci-fi games too. Would you consider sending me your latest on the Horse and Musket variant and I would very happily give my two pennies worth if that would be of any use to you?
Regards, John
Synscatha@yahoo.co.uk

John,
Thanks for offer. There have been more than few over at the Yahoo group lined up for the same thing. The playtesting has been going on for 5 years. The rules, I'm not worried about. The scenarios are what I'm currently doing.
-J