Only 5 of us last night. The perfect number for all those boardgames out there we never get to play. First off: 1812: Invasion of Canada by Academy Games 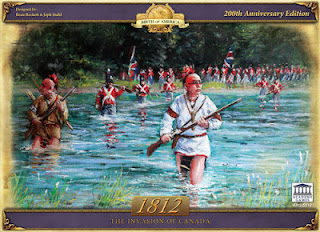 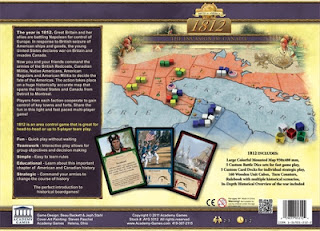 © Academy Games
This is one of those periods I've read about, think is cool, but will probably never game. This was the next best thing. With five, each took command of a different army: British, Canadian Militia, US regulars, US Militia and me commanding the Indians allied with the Brits.
For those not familiar with the game, turn order is drawn randomly from a bag. When its your turn, you must play a move card from your hand of 3. If you move where there is an enemy, a fight happens using the special dice for each army. The dice sides have blanks, retreats and bull's eyes (hits). Militia have more retreats, regulars have more hits. Simple?
Th team with the most captured enemy cities by turn 7 or when one side has played its Treaty cards, wins.
The game started with a lot of combat, quickly became a stalemate, and then in turn 4 the US captured 4 Canadian towns and played their Treaties. Over. Bang! Just like that.
A lot of fun, and replay value. Also could work good for a campaign game for miniatures.
Next up: TransAmerica. 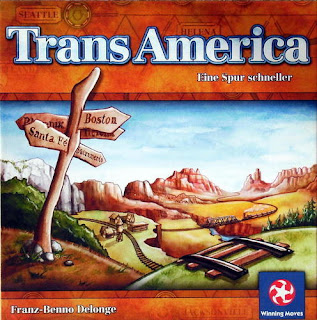 © Winning Moves
No not a game of trans-genders crossing the US. It was a simpler, but at the same time more compelling version of Ticket to Ride. Same kind of railroad building premise, but I think a sleeker game. Again, highly recommended.
We finished the night with an old favorite of mine: Condotierre. 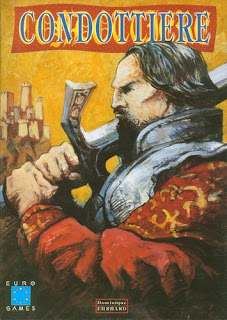 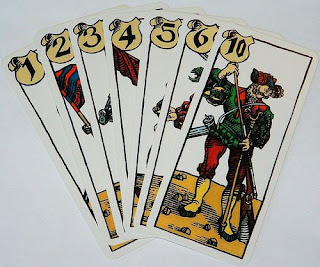 A game of bluff and risk to capture Renaissance era Italian Cities. I have the older (cooler) set with the weird shaped cards. Each player gets 10 cards. Most are mercenaries that have numerical value. There are also special cards that played in conjunction with the Mercenaries enhance the played cards. The player may place a card or pass. If you pass, you are out of the bidding for that turn. The player with the highest numerical value at the end wins the city.
The strategy comes in when you have to decide to live to fight another day, or keep going. No new cards are dealt until one player is the only one left with cards.
# games in 3 hours, and a lot of fun between. No game next Thursday. THANKSGIVING!

Posted by BaronVonJ at 8:19 AM

I am nominating you for the Liebster Award - check my blog for more details.

Wow, thanks Scott. Have no idea what that means, but I'll check it out.
-J