The Visitor. A VSF battle

crackle-crackle..."Science Division observed several meteorite impacts this evening in Sector 13. One meteor exhibited an erratic flight path upon entry. Dispatch Assault Zepplin Von Seydlitz to investigate. End transmission"....
With this ominous message, the players were tasked with checking out all the impact craters on the table, and returning with anything significant.
The German players got the speed, while the Anglo-French players got the firepower. Both tried to send most of their forces around the flanks. The Germans marched one unit right down the middle of town, supported by a Nightshade created Land Monitor, while the unicycle Uhlans and velocipede swung wide.
The Anglo-French hugged the flanks, only sending Impervious Suits and a lone tricycle rocket battery up he middle. 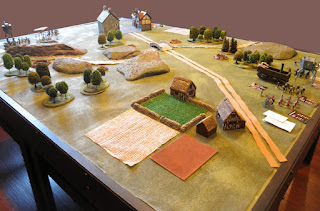 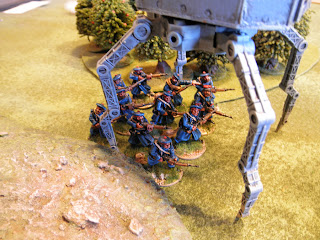 French Marines use the Spyder as cover 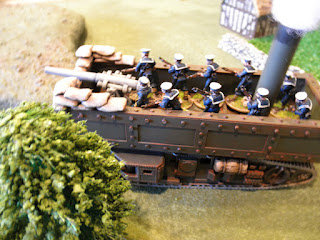 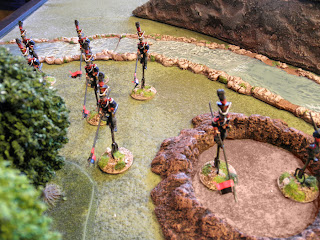 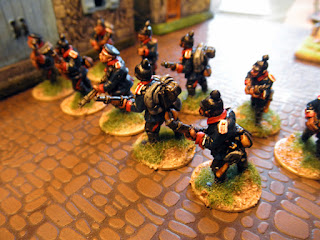 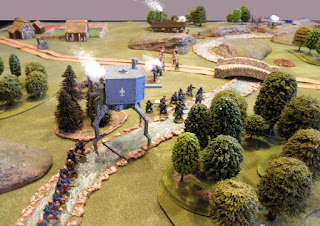 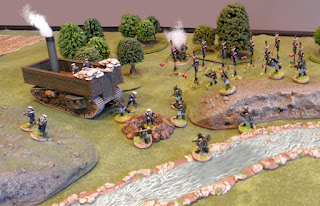 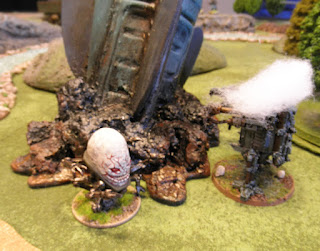 The pilot of a Killenkanner finds a strange craft crashed in the field. An even stranger creature emerges. The Killenkanner pilot "hears" inside his head, "Take me to your leader". 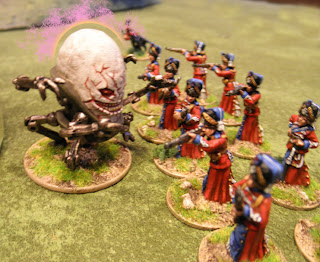 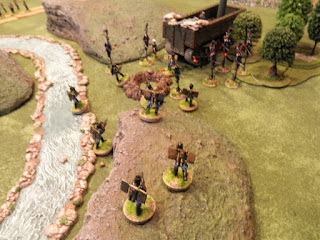 The ladies blast away at some British troops assaulting the Killenkanner.
With evening waning, the Anglo-French called it quits. Their forces were down to a few contraptions and the Tricycle Rocket team who had only moved 6 inches the whole game.
The Germans escaped with the wreckage of the ship and the strange new Visitor form the sky. What secrets would he bring, and could it turn the tide of the war?
Once again, GASLIGHT, with some of our own tweaks, provided a fun game. It has inspired to work on some new troops and some new weapons......

Posted by BaronVonJ at 8:55 AM

A most entertaining battle report!

Might I enquire as to the nature of the "tweaks" you've made to GASLIGHT. I'm in the process of what amounts to a complete rewrite, mainly for my own amusement to better reflect the games as we play them and I'd be interested in hearing what parts of the game other people felt needed fixing/changing.

A few quickies:
Movement is 6 + 2d6". Drop the highest roll is regular move, drop the low for charging.
Machineguns: I have the GW dice that have a 1,2,3 and "jam" on them. We roll 2 or 3 of those per MG type. What comes up is the number of d20s rolled to hit. Any jams need a turn to unjam.
We use the simplified damage chart for vehucles from GASLIGHT battles.
Also generally use the unit activation from Battles for speed of play.