I've been running a Supersystem2 super hero campaign infrequently for a little while now. Over the course of the games, our Heroes have failed to stop Emperor Ape and his devious plan to build the Simian Ray. A device that once fired would turn all humans on Earth into mindless apes, under the thrall of the Emperor.

Now, a few heros who were off world at the time, have return to stop him. Secretly docking with his space station, they must battle past his hench-apes and robot defenses, disabled the ray, and save the few astronauts who were one board when the station was captured.
Can they do it? Or is the Earth doomed?
To play the game, Lead Addict has graciously lent me his Dwarven Forge Space Station stuff: 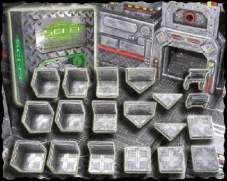 I think it's the first time it'll see action. Stay tuned, True Believers, for the post Thursday wrap up.
Posted by BaronVonJ at 8:19 AM