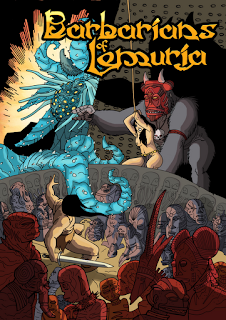 Like more than a few wargamers, I started in Role Playing Games. D&D specifically back in its hey day. Painting miniatures for the game led to painting armies. We still play D&D, as you can see by my Beyond the Wall blog.
So I still pick up the occasional RPG related work. I read great things about Barbarians of Lemuria. I have a soft spot for the true Sword and Sorcery stuff like Conan, as opposed to the high fantasy of Tolkien. BoL fits into this, but is more than just a great background setting. The illustrations are really nice for what should be a cheapo pdf download. It's a really nice set of rules. Very simple. Very elegant. It emphasizes the story telling and not the mechanics.
At the heart of it is a career mechanic. I've played dozens of RPGs where the entire back of the record sheet is the mammoth list of skills my character has acquired with their numerical value.
BoL just has you pick four previous careers. I was an escaped slave who became street urchin, who became a sailor, who turned to piracy. Done. Now, in the unfolding adventure, if i run into a situation that I think one of these careers would help me, I just let the Game Master know, and he/she decides if it indeed applies. For example, the last little excursion didn't pay off, so I need some cash while in the big city. My previous time spent as a street urchin taught me how to pick pockets. GM concurs. It's that easy.
After a long lunch yesterday with Lead Addict, we discussed what we want and don't want out of wargaming. I was one of those guys who spent many a late night drawing dungeons and building worlds. I don't have that time anymore. Even if I find a set of rules that works for me, I don't have time to stat up entire armies from scratch. Especially since my group can have 6-8 players every week. Not saying you have go the GW route and have the entire thing spoon fed to you and you can't operate outside of cannon, but don't make me work so hard.
In summary, if like RPGs, pick up Barbarians of Lemuria. And I need to focus.
Posted by BaronVonJ at 7:35 AM

I'm sure you'll get lost of posts like this, but have you ever looked at Risus? It tends to be billed as a light, daft game, but can be played 'seriously' and uses a similar idea of broad descriptions covering a multitude of possible skills.

Cool. I'll check it out. Right now, we're still in our RPG campaign, which is fun. Another good game is 3:16, a galactic war RPG.