Borogravia, knocked out of the War? 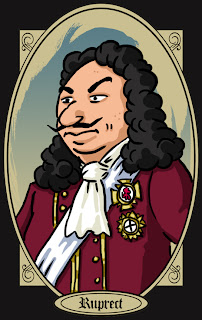 As our readers may recall, Prince Ruprect of Borogravia (boo, hiss), was stopped from invading the Arch Duchy of Volborg several weeks ago. In a final attempt to enter the duchy again, he swung his forces wide, thru the capital of Unkerlant, Koenigstadt, and entered the Marches. Tired from the forced march and abandoned both by his allies and foreign advisors, Ruprect made camp in the holiest of places, the Rock of Saint Osbert. 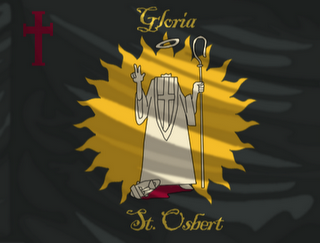 The flag of St Osbert
Though never a particularly pious nation, Unkerlant does have a soft spot for their patron saint. Osbert was a wayward monk sent to preach to the unholy barbarians located in the secluded valley that would become Unkerlant. Osbert approached the local chieftain, Unkar, and began describing the wonders of Christianity. Unkar promptly had Osbert's head detached from his body. Still, legend says, Osbert kept preaching the gospel. He was set on fire. Still he kept singing the gospels praises.
The chieftain was impressed. He would not convert, but from that point on, his descendants would. St. Osbert would come to embody the fighting spirit of the people of Unkerlant. Battling on despite the odds. 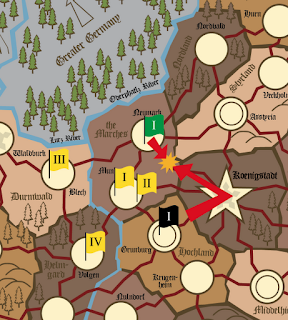 While camping outside this holiest of places, Borogravian scouts brought Ruprect bad news. Franistover was coming. Flush from his resounding victories over Zlobenia, Prince Adalbert had moved swiftly across the north and caught Borogravia unawares. Stuck quite literally, between a rock and a hard place, Prince Ruprect decided to make a stand.
At noon, on a brilliantly beautiful day, the cannonade began. Franistover took a gamble and stacked all of its cavalry on one flank. In a giant cloud of dust that threatened to block out the sun, the horse rumble forward. 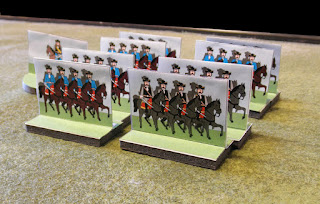 Borogravian Horse awaits their foe
From the start, Prince Ruprect had trouble moving his forces forward. The Guard units, under his son Ruprect the Younger, simply would not budge. Had the long march worn them down too much? Were the notoriously stalwart Borogravian troops, now too filled with raw recruits to fill the ranks? 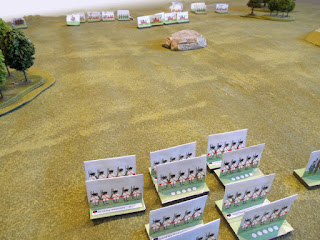 Meanwhile, the Franistoveran horse plowed forward. Borogravian horse was forced to fall back, rather than be overwhelmed. But, this pushed the line back on itself, until Ruprect's battle line resembled a fish hook.
In the center, the Borogarvian artillery was pounding the Franistover lines. Prince Adalbert's Loyal Mountaineers, took the brunt, stoically holding the line despite horrific casualties.
As the bell of St. Osbert's temple struck 3pm, Franistover's gamble paid off. In a matter of minutes the sheer mass of their horse crushed Ruprect's left flank. The Prince himself barely escaped capture as a tide of broken men streamed south. 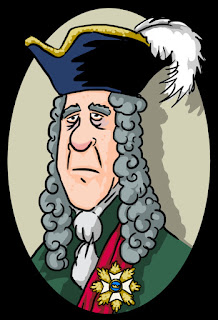 Adalbert Victorious
The victorious Franistoveran horse pursued long into the night, rooting out Borogravian troops from barns and haystacks.
It looks as though Prince Ruprect, that foreign invader from the south, is well and truly out of the war.
Posted by BaronVonJ at 7:50 AM

Nice report Baron. I have a better respect for the Holy Rock now. The paper soldiers were great too.