Brink of Battle and Pike & Shotte

With the great weather lately, I've skipped valuable painting time to sit on the back porch with a cigar and a nice summer beer and read. I thought I'd take a minute to give my views on a couple rule books I'm reading.
Let me start by saying I've written a few rules and published my own. They were a small set, meant for those nights when you just wannna dig out and play. They have a small, but loyal following. I've been working on their first expansion, and it's proving to be a complete pain. Not hard, just can't get into it. I say this because I respect anyone who writes rules then throws them into the aether. Wargamers are a cranky, contentious lot, so you better have a tough skin when you do this. Also, as much as anyone argues about historical wargames it really comes down to what a fellow gamer once said, "what movie do you want to play?"

First, is Brink of Battle. When I first read about a set of skirmish rules that could span ancients to modern, I was highly skeptical. How generic can they be and still be fun? The author, Robert Faust  says, "pick a single year from history, and go". Okay.
I got the pdf, printed all 132 pages, and plunged in. Wow. I kept saying this. Wow. Initially I was put off because the author keeps going into excrutiating detail on every level to make sure you understand. It can be almost like reading a legal document. As much as a pain I found it, I got it. Even a beginner to wargamer could get it. Thus, the 132 pages.
It can really be played from 5 figs to 15 a player. The basic concepts do work for multiple periods. The period specific rules (which the periods are split between ancient, early gunpowder and modern) add the flavor. I was amazed by what was accomplished in a few rolls. Faust says it's not an IGOUGO rules set because each player is involved at every step by counter-rolls and the non-phasing player gets an interrupt, but it really is I activate a guy, then you, then me.
But, as I said before, it is really impressive. I'm ready to get everyone in the group to "pick a period, and play".
Pros: Well thought out. I don't think you'll find something that isn't here. It makes a small investment in miniatures to test out all the myriad periods I like.
Cons: No sample armies. No examples of troops really. You better know your period  and go from there. For some, that's great. Make a group that you think matches your idea of how the period is. As discussed in an earlier post, this ain't for me. Don't have time.
Review: Buy these. The pdf is about the cost of a large pizza. He's working on a mass battle set, which I will buy in a heartbeat. 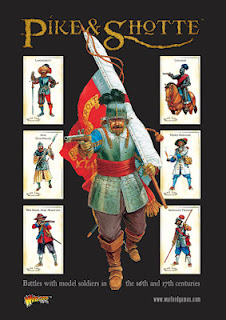 Pike and Shotte. I have a feeling this one is going to hurt. I preordered this probably two seconds after it was announced. A couple of reasons. Black Powder and Hail Caesar (both by Warlord) were a revelation to me. This is how I always wanted to play a wargame, and with the right group are a ton of fun. I love Fire and Fury. It is my go-to set for ACW. For years I have played with friend at his house. His games are notorious for being huge affairs with tons of beautiful minis. They also never get done. We play all day with no result. We tried the same forces with Black Powder. Two hours later we had fought to a real conclusion. Everyone had a look of shock, "did that just happen?"
Sold.
Hail Caesar did the same for me when I playtested them with Renaissance era forces. They're not really written for this, but to me the Italian Wars are Ancients with guns.
Second, PIke and Shot is MY period. I can't explain it. Big pointy sticks (paging Dr. Freud!), crude firearms and the death of the knight on the battlefield. It all calls to me like Nappies do to other players. This book was gonna range from from the afore mentioned Renaissance to Early Lace Wars. It would hit all my favorites between.
I waited and waited for the book. I followed the discussions on the Warlord boards and Yahoo Groups. There were things I was not liking.
Talk of Pike and Shot being separate units. I know this is technically how they operated, but at the scale for the tabletop, this seemed odd. In later times, skirmishers operated ahead of the troops that was their parent, but few rule sets model this. The rules I read about handling this seemed cumbersome for being written by the Black Powder guys.
A month went by. I finally figured out they sent to the wrong address (thank you Paypal). After I straightened it out with Warlord, I got the it in a week.
Wargamer porn at its finest. Nice hard bound book. Tons of color pictures and photos. Well written (except the flaw that all the Warlord books have, really hard to track down specific rules). 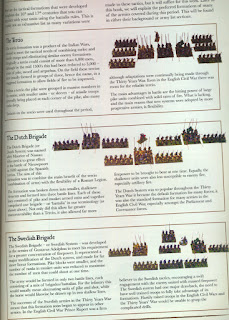 Used w/o any sort of permission. Don't those formations look like a pain?
After playing a few games of "Victory without Quarter" a really fun quick set of rules for ECW, P&S has its work cut out. I haven't finished reading yet, so I'll give a full report later, but Initially I'm sad. Formations have too many figs or not enough. Renaissance Swiss formations were HUGE, yet they're the same size as musket sleeves. Trying to control separate pike and musket units that are part of the same Battalia, upon reading sounds like a mess. Guess I'll have to try it. Luckily, I have a 4 day weekend coming up.
Pros so far: Beautiful book.
Cons: the rules themselves. I may change my mind but.....

On a side note, the Basement Generals are playtesting Scott Pyle's latest rules for Fantasy, and they are great.
Posted by BaronVonJ at 10:14 AM

As wargamer fatigue sets in and the demands on my time increase in everything except wargaming, I too am continually dismayed at the amount of work the authors want me to do, without giving me the basics of trrop constructon, basic army lists for representative troop types and the like.

I hope BoB is as enjoyable as you describe. I look forward to reading it.

Looking forward to the SS2 game and the Dugeon Delve game as well.

I too was initially really looking forward to the Pike and Shotte rules . . . but got turned off by the discussions on their Forum.

I will be interested to learn more of your opinion once you've had a chance to try them out.

Get better, Jeff. I'll try to get through them this weekend and maybe set up a few things on table. I hope I'm wrong. There are some guys on the forum that have "fixed" some things, so maybe that'll work.

`Brink of Battle sound interesting, might give them a try, if I can.

Pike & Shotte rules I quite like but I've only dipped a toe in so far. I've been searching for years for a set of rules for the Italian Wars (P&S is my 'thing' too)that I really liked and had high hopes for these rules, not sure yet.

I might check out Victory without Quarter, haven't seen those yet.

Enjoy the beer, the cigar and read on the porch, sounds like a plan.

VWQ is free from Quindia Studios. Has some bugs but really fun. If P&S doesn't work for Italian Wars, I'll go back to Hail Caesar. They worked great.

Very nice reviews. I feel like I have a decent understanding of what to expect in Brink of Battle. Pike and Shotte (or however it gets spelled) is not my forte but again, it's good to know what's out there. I appreciate the thoughtful reviews.

Thanks for the review of Brink of Battle Baron. I am glad you find it to your liking.

When I say IGOUGO I'm referring to 'I take my entire turn, then you take your entire turn" types of games, just to clarify. ; )

On our website in the Downloads section at www.brinkofbattle.com you can find my tutorial on force building, as well as roster printouts, our tables for building your force, and the Fantasy & Sci-fi public play test materials.

And on a side note, thirty years of gaming with my fair share of rules rapists/lawyers spurred me on to writing a set of rules that couldn't be misinterpreted or abused. Only time will tell if I pulled that off! :)

And you are not the first person to request some premade roster choices. I won't ever produce army lists, because that is where power creep begins, but in our fantasy supplement Epic Heroes, I promise we'll have some 'grab & go' model profiles for those of us that are short on time.

Thanks. But, it would be great to have just a few starter troops to give the rules a whirl.