How to spend a 4 day weekend. 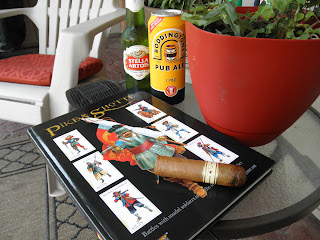 The picture kinda says it all. We here in the States got Monday off for Memorial Day. I decided to tack Friday onto that and get a mini-holiday of four days. Four days blissfully free of soccer games and practices. My beloved wife worked hard all week so no one would have to do chores all weekend.
This time off allowed me to sit on the back porch, enjoy a cigar and a few pints and really finish Pike and Shotte. Memorial Day is about reflection. So I'll get to it after I cover the long history I have with this period rules.
1644: The grand daddy. Really the precursor to Warhammer in many ways, with all that entials.
DBA/DBR: Too much like chess for me.
Warhammer ECW: Too many figs to play. Hate the Warhammer mechanics. And especially didn't the like the way pike and shot groups were separate entities.
Forlorn Hope: Wow. The turn sequence alone took a page and a half of the QRF. Single fig basing. Next.
Warfare in the Age of Discovery, and twenty others I'm trying to block out....
Then I played "Victory without Quarter" a few times. They are a set of ECW rules available for free. Besides being free, they have also have a few things I like. PIke and Shot units are 3 stands. Three. 60 x 60mm crammed with as many minis as you want. They are treated as one unit. The actual mechanics of battle borrow heavily from Warmaster (so does P&S). The turn sequnce is card driven. Which can be a lot of fun, especially when you throw in special event cards. But don't allow for a lot of tactical decision, as you never know how things will go (which is lot like war, come to think of it). I started basing my troops to this set.
I have professed my love before for Black Powder and Hail Caesar, as both provide the gentlemanly, easy to learn, games my group and I like. Pike and Shotte is essentially, Black Powder with a few tweaks. The parts that make it different only take up a few pages. But, oh how those few pages have lit up the Yahoo and Forum groups.
The "Pike Blocks" and the "Shot blocks" that form the regiments, are treated as separate entities. Yes, this is completely historical when you think about it. Each part acted individually, mutually supporting the other. Between the Spanish, the Dutch and the Swedish, they came up with quite elaborate ways to do this. This doesn't change how I feel about ease of play and the type of games I want to run.
But, then I thought about an earlier review I gave for Black Powder. I explained to someone the mechanics were relatively easy, but I found myself actively managing my troops more than I have any wargame. I was engaged more, balancing decisions, pulling troops back, sending in reserves. Just think how fun it could be to leave the formations of their pike and shot blocks to the players. Let them be Gustavus Adolphus or Wallenstein, changing up formations to maximize fire power versus impact.
That will mean a lot of painting. VWQ gives great games without me having to invest in the huge amounts of figs that P&S will. But, I hear you say, the Black Powder games don't tell you how many/what size your formations need to be. You could just use the VWQ basing and play both. That's an interesting thought.
The whole weekend of reading has left me a lot to think about. Luckily I have a well sticked fridge and humidor.
Posted by BaronVonJ at 7:47 AM

Looks like a better weekend than hauling the fam all over town jumping from cookout to cookout. I've had the Black Powder rules for a while now, I haven't read them yet but something about just owning them makes me feel all warm and fuzzy inside.

Agree with what your saying re P&S and the warmaster connection has sparked all sorts of conversations in our group/club and you can see all sorts of lights going on in folks heads.Don't have a problem re the number of figs though.

Sounds like your holidays were enjoyably well spent anyway. :-)

Glad that you had such a nice "holiday" break.

I'm still going to be interested in reading about how the rules play.

I'm working on some paper starter armies as we speak. Maybe Thursday? Wish I hadn't sold all my stuff to Lead Addict....