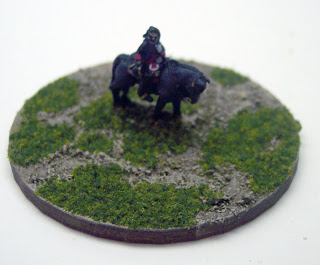 The man himself as he appears on the battlefield. The Prince sits astride his black charger, Malevolence.
As mentioned in prior travelogues, Borogravia was once part of greater Unkerlant, but was partitioned off in the last war of succession, nearly a century ago. Ruprect's father Otto, brother to the recently deceased Karl Franz III, seized Borogravia in a bloody coup after realizing his chances of ruling Unkerlant were slim. Otto ruled Borogravia with an iron fist, ruthlessly bleeding the peasantry dry. Prince Ruprect has proved to be a more refined ruler, subtle in his machinations.
Posted by BaronVonJ at 1:55 PM

The Prinz looks very lonely on that stand, where is his staff of officers and lackeys?