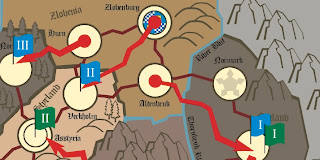 Zlobenia quickly took advantage of chaos to march into its neighbor’s lands. Duke Sigmund personally led his troops into Ostland, bypassing the fortress of Normark and stopping in Ostvald. The tiny Ostland regional forces could do little to stop them.
Simultaneously, another force led by General Wilhelm Vasistas moved into Nordland, and its capital Nordvald. There, as sign of peaceful intentions, the general visited the grand cathedral of St.Dilbert the Unfortunate for morning prayers.
Styrland was the next feel the trod of Zlobenian boots. General Oscar Franfurter stated he and his men “were merely on parade through Veckholm, and might stay to take in the sites”.
Posted by BaronVonJ at 11:17 AM

May your enemies meet a swift end! Go Zlobenia, go forth and Conquer. Cavenderia offers her support, a loan could be arranged if the land finds itself in financial straights.