May Moves: the Northeast 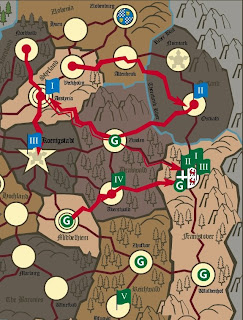 Zlobenia’s 1st Army under the Duke himself marched out of Ostvald, quickly to be replaced by the 2nd Army. The Duke reached Zwolen in Drakwald, and was confronted by not only a Franistoverian garrison, but an army falling back from Asstyria. Both armies passed each other on the road going opposite ways. The peasants could only watch in shocked dismay as the two generals tipped their hats to each other as they passed. The Duke moved on to the Electorate of Styrland, exchanging places with the Zlobenia 2nd Army.
Then, in a bold move, Zlobenia’s 3rd Army marched into the capital, Keonigstadt. General Vasisdas was greeted with much pomp and circumstance by General Von Stern, commnader of the Civic Militia. Now an Electorate and the capital are in Zlobenia’s hands.
On the Franistover front, Prince Adalbert pulled back almost all of his troops to the capital, Wurzen, perhaps in response to the Zlobenian troops sitting on his northern border. But, a significant number of garrisons have been left behind in four towns, holding firmly on to three provinces. The 5th Army seems content to sit in Pfugzig, perhaps keeping guard against Borogravian incursion.
Posted by BaronVonJ at 10:25 AM

Brilliant feint by the Zlobenians forcing the Franies to consolidate in defense of their Capitol, while increasing Zlobenian holdings, including the capitol. Checking the oppositions advance, gaining territory all without bloodshed, BRILLIANT diplomacy by Zlobenian Command, HUZZAH!!! Now hopefully the Borogravians can bloody the nose of Volborg allowing for easy acquisition of the North.