May Moves: the South and West 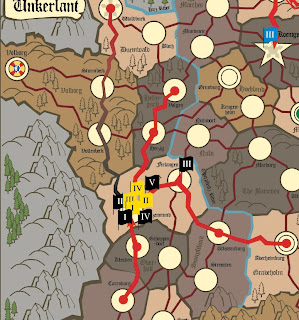 Borogravian troops converged on the town of Salzenmund, Salacia. All of Prince Ruprect’s invading army save those under General Czerezya, crowded the roads into Salzenmund only to find those of the Duchy of Volborg had the same idea. Even the Volborgian 1st army under General Wolfe forced marched all the way from Waldbruk, losing men and horses along way in order to link up with his other armies.
If a battle occurs at Salzenmund, it will surely decide the war in the west.
Posted by BaronVonJ at 10:27 AM

Photos?
Or will this be a mapboard game?
:)

The battle will be fought on the tabletop when the generals can decide on a time.
-J

My, it is getting a bit crowded there, isn't it?

They've definitely brought everybody to the ball. There's also been quite a bit of correspondence back and forth whether to fight or not.
-J

What is a war game without a fight. Cowardly dogs :(