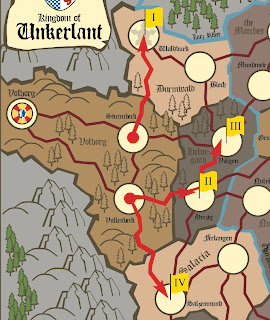 Volborgian forces crossed the border into Durmwald today. A close ally of Volborg, Count Deitrich Von Durmwald personally presented the keys to fortress of Wladburk to General Wolfe.
At the same time, three other armies marched into their neighbor’s lands. Salzemund in Salacia now hosts a Volborgian army led by General Manfred Dracohelm. The Salacians are no doubt already stealing anything that isn’t nailed down from the occupier.
Helmgard is now fully occupied. Both major towns, Herzig and Volgen have Volborgian troops in them. Bishop Bloefeld claims the invasion is “surely God’s punishment on his sinful land”, but sees the Volborgians as a godly people, worthy of Helmgard’s help.
Posted by BaronVonJ at 11:18 AM

The dogs of war are hungry!

Things are heating up quickly over there!

I must confess that I'm rather lost in trying to follow all of this with the piecemeal maps.

Could you possibly give us an overview so that we can see how these all relate to each other?