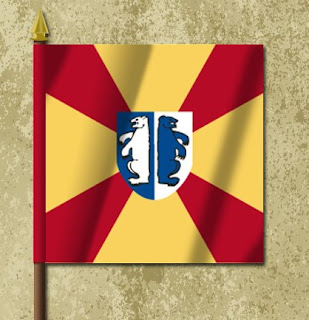 Witnesses have reported the Duchy of Volborg has finally mobilized. Troops have massed in the towns of Vollenbeck and Sturmbeck. Leading the whole affair is not the Duchess's consort Augustus, but the dashing General Maximillian Wolfe, only confirming Augustus is too busy with court intrigue and controlling rumors of the Arch Duchess's absence.
Wolfe and his sub commander General Otho Blackwald, have mustered their troops in Sturmbeck, while three other armies have been raised in Vollenbeck led by generals Dracohelm,Kringle and Reichfells. What will happen next?
Posted by BaronVonJ at 9:21 AM

Volborgians do not rise out of fear, but out of reasoned thought.
And now that verminous traitors would show their teeth to usurp the Divine Right of God to choose the next Emperor of Ukerlant, Our Most Beloved and Just, Her Royal Highness, Sister of Emperor Karl Franz III, Arch-Duchess of Volborg,Future Queen of Unkerlant, all of Volborg, NAY, ALL OF UNKERLANT SHALL RISE AGAINST AND CAST AWAY THE AFFRONT TO OUR BELOVED EMPEROR.

The decay and sloth of the rulers of Zlobenia and Franistover is in no way reflectiive of the good, godly, loyal peoples of the North and East, whose only crime is to be ruled by the addled-brained and goat loving. We of Volborg love our Norther and Eastern brothers and sisters and hope to see you liberated soon.

And the stench from the south can only be from the traitorous Borogravia. Your jealousy and greed shall be no match for the hardened steel that is the proud heart of the Unkerlant people. You shall be cast back, Demon, to the pits of despair you spawned from, and the true Divine right of God shall shine on all of Unkerlant because of it.

Awaiting the loving embrace of all my people of Unkerlant,

So "Volberg" is the sponsored imagi-nation for Lace Wars, and the others are its foes?
Nice start?
Or
How long has this been going on?

(and I'm quite jealous, you have live opponents!)

Frankfurter,
Unkerlant is the kingdom, with 4 major opponents in the Second War of Unkerlantian Succession (the Duchy of Volborg, Franistover, duchy of Zlobenia and Borogravia). If you peruse the tab for "Unkerlant" on the home page you'll see the whole history so far with 26 travelogues describing the major and minor regions of our angry little kingdom with uniform descriptions
Your Faithful Servant,
BaronVonJ
Aid to His Most Royal and Just Majesty, Karl Franz III of Unkerlant

Just to be pedantic, this post is unfortunately not labelled 'Unkerlant'.