This northern duchy is considered the most “European”, by their fellow denizens of Unkerlant, and therefore the least Unkerllantian. The Duke allows foreigners in his court and has even traveled extensively outside the country. A fact that horrifies most of the country. The king, Karl Franz III did sire a child that lived to adulthood, just not a child with the queen. Before he married Queen Elzbeth, the king fathered a child with the Duchess Friedricha of Zlobenia. The duchess never married, and their son Sigmund took the title of Duke of Zlobenia after her death in 1673. Duke Sigmund “the Bastard”, is an indifferent ruler, usually hunting instead of governing. Only recently, has Duke Sigmund showed any interest in ruling, with the death of his absentee father looming.
Zlobenia is hilly and actually has almost passable farmland, even growing grapes for the famous Zlobenian wine “Unkergrappen”. TAs for populated areas, the town of Altenbruk commands two crossing points for the River Blut and as such is of great strategic importance to the Duke.
Hurn sits amid decent horse country and houses the Royal Stables, home to the formable Ducal Horse Grenadiers. Chosen from amongst the best (and largest) horsemen in the duchy, these mounted grenadiers are fiercely loyal to the duke and form the vanguard of any military mission the duchy takes.
Zlobenburg is the home of the duke, and looks like any other modern city in Europe, except the citizenry has the usual gloomy, melancholy look of most Unkerlantians.
Zlobenian troops have been introduced to modern European drill and tactics by foreign advisors imported by the duke. But, other than the Horse Grenadiers, most troops are indifferent soldiers, suspicious of outsiders giving them orders. 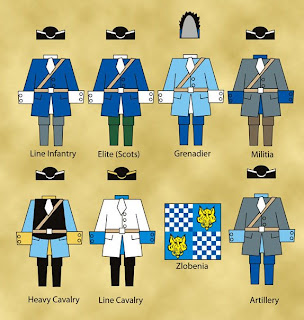 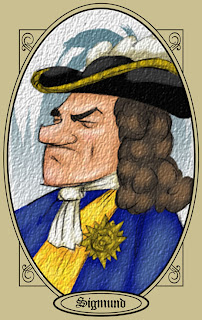 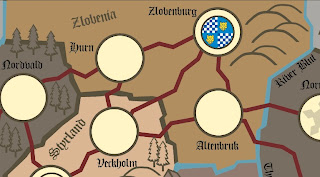 Posted by BaronVonJ at 9:25 AM

I'm really enjoying your set-up as well as your maps and uniforms.

Really enjoying the development. I can tell no real difference in your regular line and elite Scots uniforms, could you explain the difference? The boarshead standard is my favorite so far.

Very enjoyable! I love all of the bits of background, the uniform graphics and maps and portraits!
The style of your portraits reminds me of the pictures in the card game "Guillotine", which I enjoy, too. :-)

Geoffrey, the Scots have green rather than gray on the lower portion of their uniform (had lots of practice as a kid with those "spot the difference" picture puzzles. lol)
I'm curious about their history - is it as colorful as that of the Irish in the previous post?

The storied past of the Zlobenian Scots Regiment can be traced to the conflict known variously as he First War of Unkerlant Succession, the Third Unkerlant Civil War or the King's Saurerkraut War.
Zlobenia, traditionally being a bit more worldly than the rest of Unkerlant sent abroad for mercenaries to hire for their part in the conflict, being unwilling to shed their own blood in what they saw as futile conflict. Instead of a crack fighting unit they got Allister McKay and ragged band of cutthroats, thieves and vagabonds. Rather than keep them in the duchy where they were doing more damage than good, Duchess Sophia cast them out into greater Unkerlant. Starving and tired they fought more out of desperation than any sense of loyalty to Zlobenia. At the Battle of Two Forks the desperate regiment smashed through the enemy lines and captured their camp, along with the enemy general.
They returned heroes, their leader McKay became a court favorite (and some say lover of the Duchess) and the Scots Regiment became an institution.
I remain your humble servant,
BaronVonJ,
Aide to His Most Just and Royal Majesty,
Karl Franz III