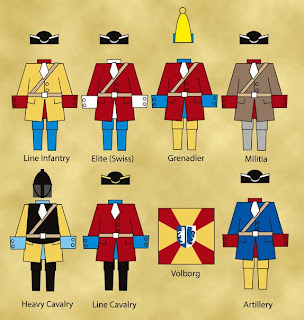 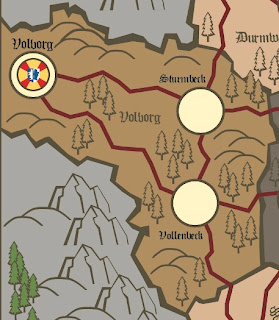 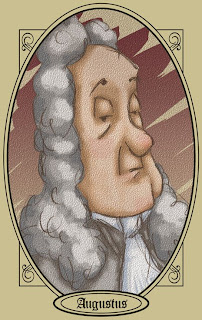 Posted by BaronVonJ at 2:30 PM

Looks like you've been having fun!
But I didn't find the map for the whole country to see how all this tiny provinces fit together?
:)
A

An overall might be helpful, but what of state security? Your uniforms, flags and maps are really quite unique...

Greetings from the Kingdom of Wittenberg.

Whereabouts are you in Europa in relation to other imagi-nations -- see schematic 'Map of Europa' at http://www.tidders.freeserve.co.uk/EvE-Whos-Who/; if you would like an entry 'E-mail Brother James'.

Excellent work with the generation of units, uniforms, etc. Keep up the great work!!

Gentlemen,
The exact location of Unkerlant and it's place in the world, are indeed, at a matter of state security. Our tiny kingdom has managed to survive this long by its unique geography and violent xenophobia. What foreigners we have are usually descendants of immigrants brought in for specific tasks, and then forbidden to leave as a matter of security. For, instance, the elite Swiss guard of Volborg were originally brought in as cheese makers for Duke Vincent Von Volborg 3 generations ago.
Maps of the Unkerlant itself are an intensely guarded secret. Although it is rumored the Unkerlant Chronicle, the only trusted newspaper of the kingdom, might be providing maps as a accompaniment to their correspondence of the ever approaching war.
Ever your servant,
BaronVonJ,
Aide to his Royal and Just Majesty, Karl Franz III