I'm not a fan of playing games set in movie worlds. Don't now why. Despite loving LotR and the great GW miniatures, I have zero interest in gaming it. Same goes for that beloved part of my childhood, Star Wars.
So, when Bill brought over X-Wng I was skeptical, especially playing "real" characters like Luke and Vader. But, the game play made up for it.
The minis are sweet. The game itself simple, with every miniature getting Shoot factor, evade, hull points and shields. You also get a maneuver wheel, which is like a really simplified Blue Max chart. 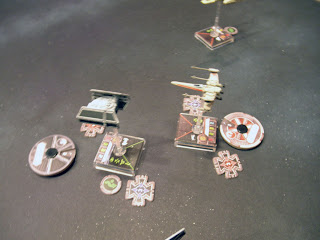 We, the evil Empire had 4 TIE fighter (one, Vader, advanced) vs. 2 X-Wings and a Y-Wing.
The TIEs have no shields but are more maneuverable. I made the most of Vaders 2 actions by taking evasive actions while targeting too.
The result. My crappy nobody TIE pilot almost shot down Luke Skywalker, while Vader and the other 2 knocked out his buddies. Luke would escape,...for now.
Had a lot of fun. Found myself making TIE fighter noises and "pew-pew"ing. My only gripe is the number of counters on the board. Oftly cluttered for a space battle. But, this would make a great early jet game.
We finished off the night with Epic Spell Wars. Again, lots of fun.
Posted by BaronVonJ at 8:00 AM

I really appreciate your coming up with the playing surface in the appropriate color.
I will know more about how to set up the battle next time. From reading other blogs, you load the Rebels up with extra stuff for their ships, and have a lot of Imperials. I need to get more TIE fighters...

I am tempted by this one, being a fan of the origianl movies, and No.1 son is keen too... plus no need to paint anything so playable straight away...

Bought this for my visiting best friend and we played 2 whole days worth. Very pleasantly surprised at how much fun and little stress it was to play. Although I consistently forget to choose actions after moving :/