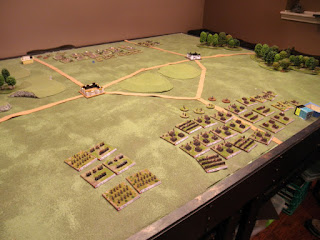 We hadn't dug out this old favorite for awhile. Some of the group actually had never played Fast Play Grande Armee, so this was their chanve. Of, course, those particular few didn't show.
I've been battlin' the Two Week Crud so sat this one out, instead helping remember rules we alwasy forget. 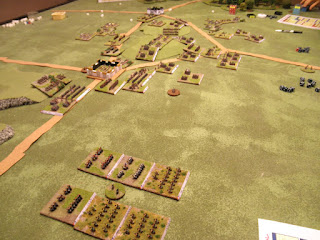 The scenario was an Austrian defense in depth. The French were going to have to capture or at least push the Austrians out, of the towns and secure the bridges beyond. The French had a 1.5-to-1 advantage. 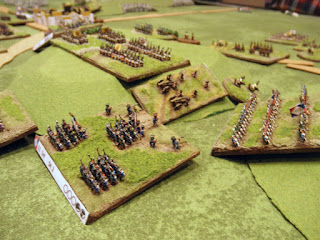 The Austrians decided to push as far as they were allowed to deploy forward, taking the hills. As you might have guessed, it was a hard slog to push them off. It wasn't helped by the French left, made of the entire cavalry force. They wouldn't budge. When they finally got moving, they swept everything aside and made a huge wheel around the Austrian right, but not before time ran out. 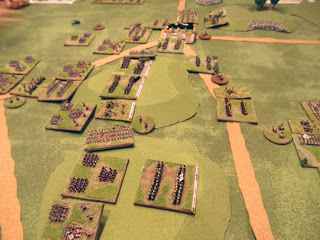 The Austrians managed to do the same on their left. A defensive strategy quickly went offensive as they began to push back their French opponents. 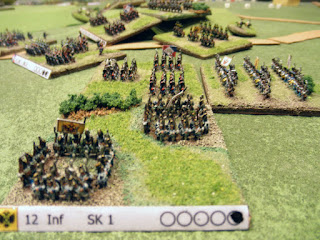 As usual, a great game with plausible outcomes and a feel for the period. I like that there is built into the rules, a great follow up, post game pursuit mechanism. It pays not to commit all your cav. You can turn a minor victory into a crushing one as your victorious horse ride down the defeated foe. Great for campaign. Wish Sam would publish these by themselves instead as a an add on for Grande Armee.
The great 6mm Baccuss minis painted by Mr. Scott.
Posted by BaronVonJ at 7:39 AM

I agree, Grande Armee is a great system. Your game looked very nice - quite like your system of labeling, very effective.

Curt C - labeling is very easy, I just created unit labels and printed them out. Then covered them with Glossy Transparent Tape. That allows the use of dry-erase markers for book-keeping. Unit rosters and strength are self-contained.

I like the FPGA system for the ability to field a multi-corps battle and be able to play it out in a few hours.