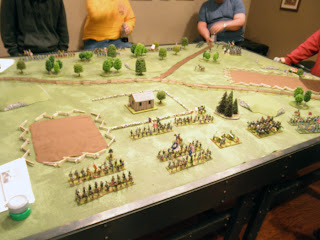 I've owned RF&F for awhile, but never understood the appeal. Why play a more complicated version of plain old F&F? New guy John has a very fine collection of 28mm ACW stuff and has been itching to try RF&F. Regimental F&F lets you paint all those fun troops that don't get represented much on a brigade level game. Those cool Zuoaves would only amount to a stand in F&F. 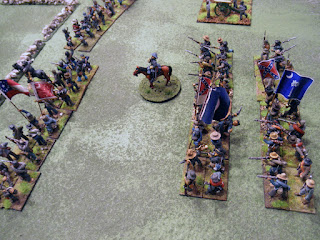 Our brave boys in butternut move forward
We had to abandon alot of the things that make RF&F more detailed like all the various troop qualities for lack of time, or at least until people got used to the mechanics. (In hindsight, we probably should have played F&F first, to get everyone up to speed). But we kept some things. The Union got rifled muskets and a 24" range and got start in the woods, while we poor REbs had smoothbore 12" ranges and started in the open. Not a good beginning.
With several "Well Handled" command results the Rebs flew across the field covering 24" in a turn. But, the Federals were able to use the woods as cover, and blast away most of the game. Only one of the Scotts made any headway, but was finally driven back. 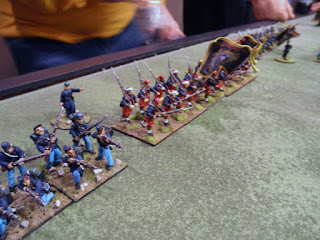 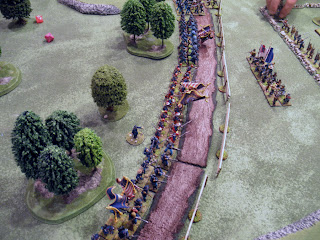 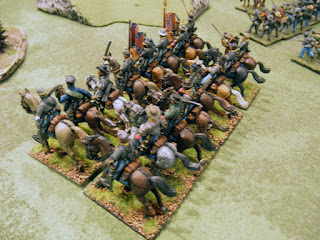 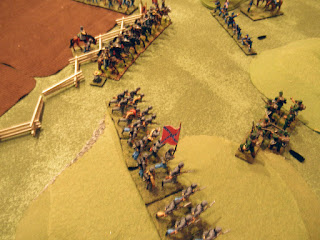 The Rebs target some sharpshooters
At 10pm we had to call it (besides, K-State was getting hammered on the TV and me along with them).
I think everyone liked 'em. I can see small battles with each unit getting different variations could be fun. Fire and Fury is my favorite ACW rules, but it is not a fast game. For time's sake, we have to try some Black Powder or Foundry's rules. Also there has been some dark rumblings of doing some 6mm ACW using Sam Mustafa's unofficial variation of "Might and Reason" called "Rights and Treason".
We shall see.
Last night's pairings:
Representing the North, Wheat State Golden form Free State Brewery in Lawrence, KS (boo, hiss). 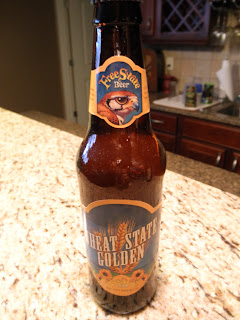 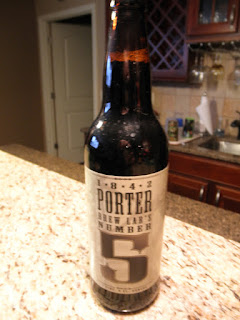 Iffen yer in the KCMO area, both breweries/pubs are worth a try.

Great time last night! I will say the Reb beer was quite tasty! Boo Hiss! Great pictures too, except the only one with my figs in it featured my dastardly Reb unit.

send them to me and I'll put them up.

Yes, the time is a reason that our group won't play Fire and Fury - they won't touch anything that can't be concluded in pretty much 2 1/2 hours. Slightly limiting ...

"Those cool Zuoaves would only amount to a stand in F&F."

I just used to paint regiments and field them as the brigades.

Jason, I wish I'd gotten a good pic of your Wallace's Zs; they are beautiful.

I am 100% in favor of trying another set of rules. I like the idea of simplifying things if it allows us to finish up in 3 hours.

Now that Jason has returned with his 25mm goodies, I am open to painting up some 6mm to try Longstreet but only if there is enough interest (as I still have a mountain of 25mm to complete).

I would be interested in Longstreet after looking at information on Sam's webpage. I do wonder about how large the battles might get. In the early war, we could get by with 28mm figures, but the information on the site said that later in the war the number of stands would double. That can make for some large battles.

Yes. OK. It's a real slog. How many games at a certain mustachioed friend of ours lasted all day and accomplished nothing? Then, one day, we tried Black Powder and finished n 2 hours.
BP gets alot of crap for being too vanilla, but I think with the right special skill rules for units, you could get ACW right.
-J

That would be easy to do. Jon's units are great for Black Powder. We could even make them 4 stands and get more on the table.

That would be 2 stands. Kinda small.

The game looks great.
Must admit I was not too impressed with my first try of F&F with ACW.
I couldn't help but think it would have been more enjoyable using BP rules...