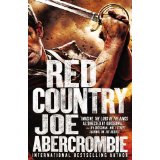 Right behind my love of all things wargaming (both tabletop an electronic) is my love of reading. A glance at Her Ladyship's newly finished library will review the depths of our bibliophillia. I thought it wouldn't be too outside the realm of this blog to include a few short reviews that might interest people who also like gamin' and readin'
I just finished Red Country by Joe Abercrombie. I'll start by saying, if you haven't read Mr. Abercrombie's First Law trilogy, starting with the Blade Itself, you are living a an unfulfilled life. You haven't read good fantasy. You are lost. Go now and read them.
Now, back to this book. It takes place in the world described by the First Law, but it's not necessary to read those to get this book. This time, we got out West. the Far Country. I could say the plot is  basically the Searchers in an Old West without firearms, but that would be selling it short. Yes, we're looking for stolen children taken by the savage natives, but we meet great characters along the way, a disgraced old Mercenary Captain and disreputable crew, the old Buffalo Bill type scout who has seen better days, and take some fun twists and turns in the middle.
Abercrombie's writing is gritty and viscerel. Some of the best fight scene description's out there. George R R Martin even tips his hat to Joe.
It short, just read it. Some great fodder for wargaming hidden in there.
Next, an unread gem discovered while restocking the library, the Fort by Bernard Cornwell. A one-off story of the Revolutionary War
And, if you don't like my reviews, I highly recommend the reviews written by the Baroness, who today celebrates her Birthday. All of Unkerlant pauses from whatever conflicts it finds itself in today to rejoice! Happy Birthday, my best friend, my heart's true joy, mother of the Boy and Girl, fellow movie/game/book lover and the bestest thing that ever happened to my me.
Posted by BaronVonJ at 10:53 AM

Happy Birthday to the Baroness, and thank you for the book recommendations

My one complaint about Abercrombie comes from being a wargamer - he'll give you page upon page of descriptions of how an axe severs a head, but if you want to know the uniform of the standard soldier in the Union army so you can start a new miniature project you're going to be a bit stuck... (short of the knowledge that he has a hat. And possibly a sash.)

To me, that's a good thing. You paint a Napoleonic French soldier and people will line up to tell you what you did wrong. The very lack of description lets me do what I want.
I always got a 17th century vibe from Abercrombie. But this old west setting got me picturing Cowboys with swords.

Funny you should post this, as I am 1/2 way through the first law book, and just picked up the second book.
I am enjoying it very much.

Best wishes for a wonderful birthday for the Baroness!

Happy birthday to the baroness!
Books are great. Now I'll have to look for the Abercrombie tomes. (possibly more books to add to the pile of "books to be read" - my paper mountain towers over my lead mountain) ha ha