Verdenheim is Unkerlant’s southernmost land. It suffered greatly from the last war of succession. Because of this Verdenheimer’s are a paranoid folk, imagining Borogravian spies everywhere. Outsiders have often been stung up on suspicion of espionage, with little to no trial.
The Von Wusterburgs, who have ruled Verdenheim for generations, have a long history of producing twins. This, mixed with their native paranoia, has led to some of the more memorable fratricides in the kingdom. Currently, another set of twins holds power. This time, however, they seem content to break with tradition. Brother and sister Electors Ernst and Lilly Von Wusterburg co-rule over a blighted and still recovering land. It is rumored Ernst is a little “slow”, and his sister Lilly actually rules.
Wusterburg the city is a walled menacing sight on a windswept plain. Its blackened walls still bear the scars of previous assaults and sieges.
Schambech is Wusterburgs’s other principle town. It has managed to escape most of the privations its neighbors have suffered. Schambech mostly exports a type of sour apple used in Unkerlantian cuisine. This osur apple is also used to make a brandy used not only for drinking, but in times of necessity, lamp oil.
Verdenheimer soldiers are a scrawny, tough lot, eager for a fight. 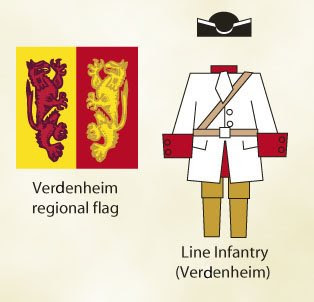 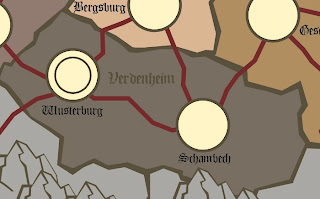