Bergstaat is the largest land in Unkerlant, compromising the mountains in the north, and the flatlands of the south. Berstatters make much of these geographic distinctions as generations of highlanders and lowlanders have fought many bloody battles over slights real and imagined. The last, and possibly the bloodiest fight, occurred during the last War of Unkerlantian Succession when highlanders and lowlanders took opposite sides.
Gesehburg, home to the current master of Bergstaat, Baron Siegfried Von Bergstaat, is the highest town in Unkerlant. Loctated in the Widowfang mountains, Gesehburg offers splendid views of the bleak countryside. Many nobles travel here to take in the mountain air and dine on the often exotic highland cuisine.
Kruetzhofen, in the lowlands, is where the iron dug from the mountains goes to be forged. In contrast to Gesehburg crisp mountain air, the sky above Kruetzhofen is black with soot. Most townsfolk wear dark colors to mask the ash raining down on their shoulders. Despite the terrible air quality, Kruetzhofener are proud of their craft, and make excellent weapons and cannons.
To the south across the border lies Grenzstadt. Once part of Bergstaat, this village was lost during the partitioning of the last war. Many on both sides of the border still consider Grenzstadt part of Unkerlant. In fact, it’s one of the few things highalnder and lowlander agree on.
Years of internal warfare have made Bergstaaters great warriors. But, it takes any even better commander to turn their aggression from each other, to the enemy. 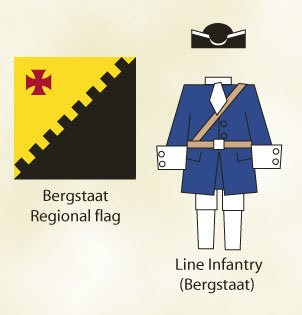 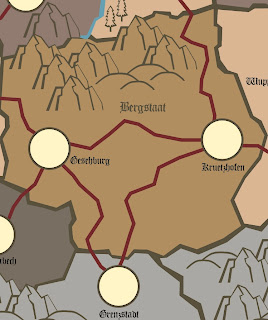 Posted by BaronVonJ at 2:53 PM