Durmwald is bordered on three sides by either rivers or mountains, and as such has always been an isolated place. It is filled with dark pines and lonely meadows. Durmwald is known for it’s oxen, and its equally thick-headed people. This is an unjust assessment as most Durmwalders are by nature a serious, contemplative people unused to new ideas in their remote land. They are also extremely loyal. Durmwald has long been an ally of neighboring Volburg. Where Volborg goes to war, so does Durmwald.
Waldburk, the largest of two towns in Durmwald, is the oldest walled city in Unkerlant. It is a noisy place, filled with bellowing of oxen echoing of the walls on their way to market. It is said you will smell the other town, Blech, long before you see it. Blech is filled with tanneries. The tanning of hides, in this case from oxen, involves a great deal of urine and feces. This has left the people of Blech and their town, shunned by almost everybody, in an already isolated part of the kingdom.
Count Dietrich Von Durmwald presides over Durmwald, and is known as a stern, level headed man, with a love strong ale and the raising of prize bulls.
Durmwalders make sturdy, tough warriors. They do require a bit of goading to get them moving, but once they get going, they come on like a stampede. 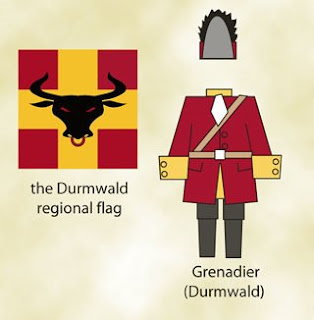 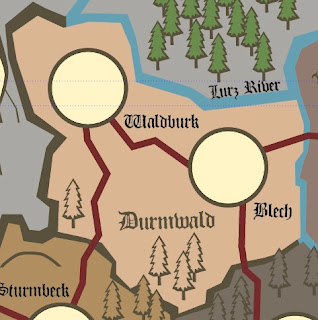 Posted by BaronVonJ at 3:00 PM