Hochland sits on a high plateau overlooking most of its neighbors, including the royal city of Koenigstadt. According to their neighbors, this has given Hochlanders an over inflated image of themselves. Outsiders consider most Hochlanders aloof and arrogant.
“As snotty as a Hochlander” is an old Unkerlant saying.
The countryside is in better shape than most Unkerlant, even bordering on pretty. As such, large tracts have been given over to the King’s hunting grounds. The King’s master huntsman resides in Krugenhiem, a collection of the leading nobility’s hunting lodges, rather than a village.
Grunburg is home to the Royal Artillery Training School. The booms and bangs echoing across the highlands not only scare the peasants, but have left most people in Grunburg a little hard of hearing.
Duke Elector Horste Von Hochland also lives in Grunburg, residing in his ancient vine covered fortress. He is a tall, rapier thin man with a hawk like nose. A shrewd man, Von Hochland was a close advisor to the former monarch and will be eager to aid whomever takes the throne next.
Hochlanders are a proud people, and will be the first in battle to lead the attack, after, of course, the artillery softens the enemy up a bit. 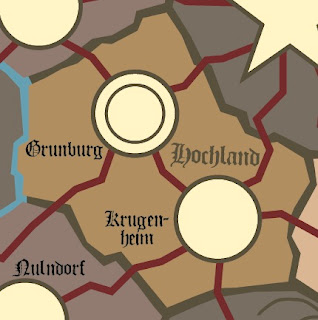 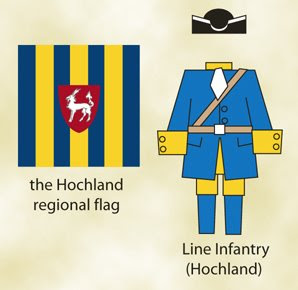 Posted by BaronVonJ at 1:33 PM

Looking forward to peruse the overall OOB of Unkerlant: 4 major powers and 27 minor ones!
Do you intend to paint all these regiments? It would be a truly pharaonic project - and achievement.

Not in 10mm. The major powers will be the majority of the painting. The minor will only get 1 or 2 units. Manpower is a precious commodity in Unkerlant, so these minor powers will be filling the ranks of the majors as the body count mounts.

Enjoying the pics in advance!