The Marches lie in northwest Unkerlant. It is a wild, unsettled place, across the river from one of Unkerlant’s many natural barriers to the outside world, the Great Forest. The Marches are full of dark woods and moss covered rocks, mists and damp hollows. The March lords rules this place, and like their people, are fiercely independent. Most Unkerlanters consider them little more than bandit kings who extort money from visitors passing through. These “travel fees” are collected by the Moss Troopers who patrol the land as border guards. Many of the horsemen are recruited to join the King’s Heavy Cavalry regiment despite their questionable reputation.
Neumark in the north, like most Marcher settlements, is more of a fortress than a village. The outer walls are surrounded by sharpened stakes and a moat, protecting the populace and their scrawny cattle. Mundmier in the south is similar, but older and more moss covered. The main trade seems to be cattle rustling, and Sir Manfred, the nominal lord of the Marches does little to stop it. As long as the taxes arrive on time, all is well. 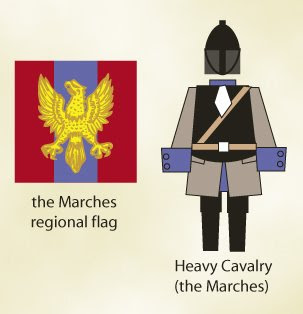 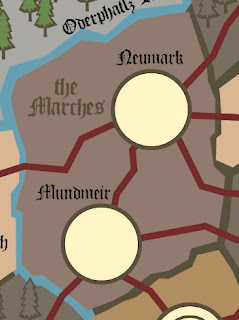 Posted by BaronVonJ at 8:47 AM